A number of equities research analysts have weighed in on the stock. BTIG Research decreased their price target on shares of Ginkgo Bioworks to $4.00 in a research note on Thursday, November 17th. Morgan Stanley began coverage on shares of Ginkgo Bioworks in a research report on Tuesday, October 4th. They set an “equal weight” rating and a $5.00 target price on the stock. Berenberg Bank initiated coverage on shares of Ginkgo Bioworks in a research report on Monday, November 28th. They issued a “buy” rating and a $6.00 price target for the company. Finally, Raymond James decreased their price objective on Ginkgo Bioworks from $10.50 to $6.00 and set an “outperform” rating on the stock in a report on Tuesday, November 22nd. One research analyst has rated the stock with a sell rating, two have given a hold rating and four have assigned a buy rating to the company’s stock. Based on data from MarketBeat.com, the company has an average rating of “Hold” and a consensus target price of $5.92.

Ginkgo Bioworks (NYSE:DNA – Get Rating) last released its quarterly earnings results on Monday, November 14th. The company reported ($0.40) earnings per share for the quarter, missing analysts’ consensus estimates of ($0.25) by ($0.15). The business had revenue of $66.40 million for the quarter, compared to analyst estimates of $54.28 million. Ginkgo Bioworks had a negative net margin of 668.49% and a negative return on equity of 85.90%. As a group, sell-side analysts anticipate that Ginkgo Bioworks Holdings, Inc. will post -1.41 EPS for the current fiscal year. 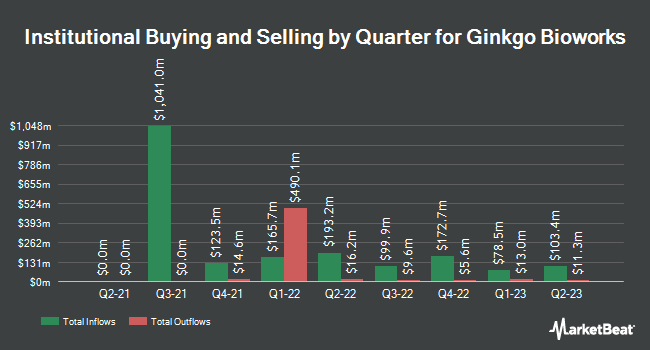