Allspring Global Investments Holdings LLC trimmed its holdings in IRadimed Co. (NASDAQ:IRMD – Get Rating) by 4.5% during the third quarter, Holdings Channel reports. The institutional investor owned 62,625 shares of the medical equipment provider’s stock after selling 2,948 shares during the quarter. Allspring Global Investments Holdings LLC’s holdings in IRadimed were worth $1,882,000 as of its most recent SEC filing.

In related news, Director Anthony Vuoto sold 1,000 shares of the company’s stock in a transaction that occurred on Monday, December 5th. The stock was sold at an average price of $28.55, for a total value of $28,550.00. Following the transaction, the director now owns 14,121 shares in the company, valued at $403,154.55. The transaction was disclosed in a document filed with the SEC, which is available through the SEC website. 43.70% of the stock is owned by company insiders.

IRadimed (NASDAQ:IRMD – Get Rating) last released its earnings results on Thursday, November 3rd. The medical equipment provider reported $0.27 earnings per share for the quarter, beating analysts’ consensus estimates of $0.23 by $0.04. IRadimed had a net margin of 25.85% and a return on equity of 19.24%. The firm had revenue of $13.41 million for the quarter, compared to analysts’ expectations of $13.17 million. As a group, research analysts expect that IRadimed Co. will post 0.98 earnings per share for the current fiscal year.

Separately, StockNews.com began coverage on shares of IRadimed in a report on Wednesday, October 12th. They issued a “buy” rating for the company.

IRadimed Corp. engages in the development, manufacture, marketing, and distribution of Magnetic Resonance Imaging (MRI) compatible medical devices. It also provides non-magnetic Intravenous (IV) infusion pump system that is specifically designed for use during MRI procedures. The company was founded by Roger Susi in July 1992 and is headquartered in Winter Springs, FL.

Want to see what other hedge funds are holding IRMD? Visit HoldingsChannel.com to get the latest 13F filings and insider trades for IRadimed Co. (NASDAQ:IRMD – Get Rating). 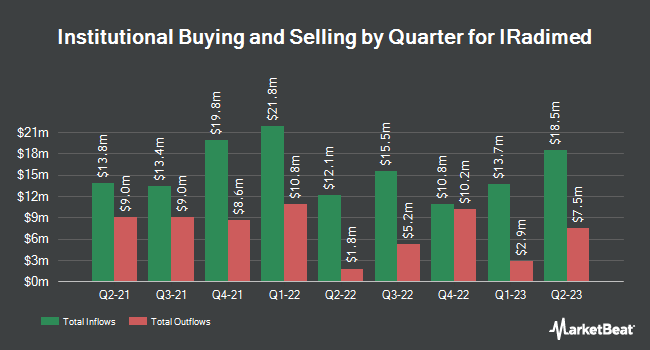 Receive News & Ratings for IRadimed Daily - Enter your email address below to receive a concise daily summary of the latest news and analysts' ratings for IRadimed and related companies with MarketBeat.com's FREE daily email newsletter.

Complete the form below to receive the latest headlines and analysts' recommendations for IRadimed with our free daily email newsletter: