Raymond James Financial Services Advisors Inc. increased its holdings in shares of Carvana Co. (NYSE:CVNA – Get Rating) by 44.1% in the third quarter, according to its most recent 13F filing with the Securities and Exchange Commission. The fund owned 64,826 shares of the company’s stock after purchasing an additional 19,829 shares during the quarter. Raymond James Financial Services Advisors Inc.’s holdings in Carvana were worth $1,316,000 at the end of the most recent reporting period.

Carvana (NYSE:CVNA – Get Rating) last issued its earnings results on Thursday, November 3rd. The company reported ($2.67) earnings per share (EPS) for the quarter, missing the consensus estimate of ($2.02) by ($0.65). Carvana had a negative net margin of 5.99% and a negative return on equity of 191.74%. The company had revenue of $3.39 billion during the quarter, compared to analyst estimates of $3.64 billion. Research analysts forecast that Carvana Co. will post -9.88 EPS for the current fiscal year.

Carvana Co is a holding company and an eCommerce platform, engages in the buying of used cars and provision of different and convenient car buying experiences. It operates through the following segments: Vehicle Sales, Wholesale Vehicle Sales, and Other Sales and Revenue. The Vehicle Sales segment consists of used vehicle sales to customers through its website.

Want to see what other hedge funds are holding CVNA? Visit HoldingsChannel.com to get the latest 13F filings and insider trades for Carvana Co. (NYSE:CVNA – Get Rating). 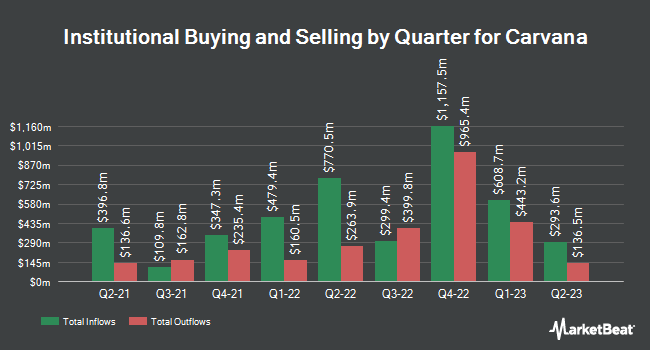 Receive News & Ratings for Carvana Daily - Enter your email address below to receive a concise daily summary of the latest news and analysts' ratings for Carvana and related companies with MarketBeat.com's FREE daily email newsletter.

Complete the form below to receive the latest headlines and analysts' recommendations for Carvana with our free daily email newsletter: