Comerica Bank trimmed its holdings in shares of Plexus Corp. (NASDAQ:PLXS – Get Rating) by 10.3% during the third quarter, according to the company in its most recent Form 13F filing with the SEC. The fund owned 21,220 shares of the technology company’s stock after selling 2,437 shares during the quarter. Comerica Bank’s holdings in Plexus were worth $2,000,000 as of its most recent filing with the SEC.

Plexus (NASDAQ:PLXS – Get Rating) last announced its earnings results on Wednesday, October 26th. The technology company reported $1.78 EPS for the quarter, topping the consensus estimate of $1.28 by $0.50. Plexus had a return on equity of 13.22% and a net margin of 3.63%. The firm had revenue of $1.12 billion for the quarter, compared to analysts’ expectations of $1.01 billion. On average, equities research analysts forecast that Plexus Corp. will post 5.98 EPS for the current year.

Plexus Corp., together with its subsidiaries, provides electronic manufacturing services in the United States and internationally. It offers design, develop, supply chain, new product introduction, and manufacturing solutions, as well as sustaining services to companies in the healthcare/life sciences, industrial/commercial, aerospace/defense, and communications market sectors.

Want to see what other hedge funds are holding PLXS? Visit HoldingsChannel.com to get the latest 13F filings and insider trades for Plexus Corp. (NASDAQ:PLXS – Get Rating). 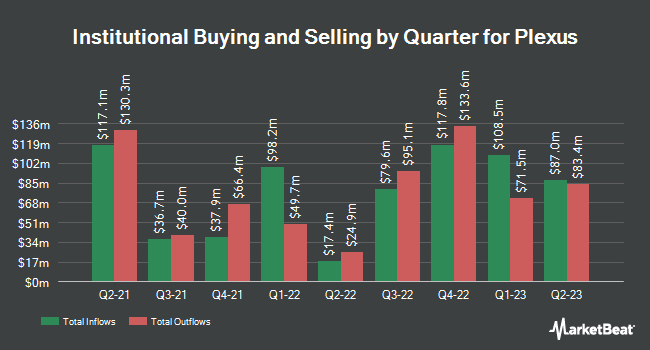 Receive News & Ratings for Plexus Daily - Enter your email address below to receive a concise daily summary of the latest news and analysts' ratings for Plexus and related companies with MarketBeat.com's FREE daily email newsletter.

Complete the form below to receive the latest headlines and analysts' recommendations for Plexus with our free daily email newsletter: