EMCOR Group, Inc. (NYSE:EME – Get Rating) EVP Maxine Lum Mauricio sold 2,500 shares of the company’s stock in a transaction that occurred on Tuesday, January 17th. The stock was sold at an average price of $149.62, for a total transaction of $374,050.00. Following the sale, the executive vice president now directly owns 26,478 shares of the company’s stock, valued at approximately $3,961,638.36. The sale was disclosed in a filing with the SEC, which is available at the SEC website.

Want More Great Investing Ideas?
EMCOR Group (NYSE:EME – Get Rating) last issued its quarterly earnings data on Thursday, October 27th. The construction company reported $2.16 EPS for the quarter, beating the consensus estimate of $2.11 by $0.05. The business had revenue of $2.83 billion during the quarter, compared to the consensus estimate of $2.71 billion. EMCOR Group had a net margin of 3.54% and a return on equity of 18.65%. Research analysts predict that EMCOR Group, Inc. will post 7.78 earnings per share for the current fiscal year. 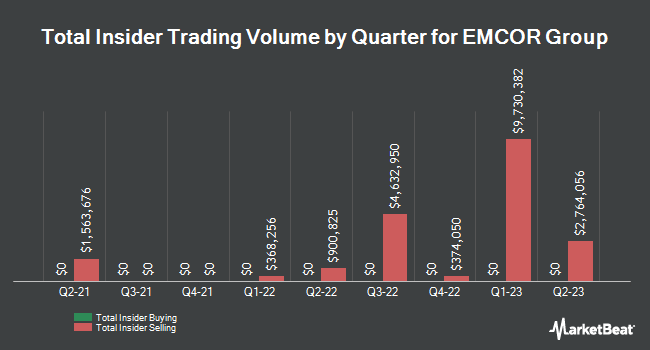 Atkore Price Target Increased to $161.00 by Analysts at B. Riley

Complete the form below to receive the latest headlines and analysts' recommendations for EMCOR Group with our free daily email newsletter: