Kinder Morgan (NYSE:KMI – Get Rating) had its target price lifted by research analysts at Barclays from $20.00 to $21.00 in a report released on Wednesday, Benzinga reports. The brokerage currently has an “equal weight” rating on the pipeline company’s stock. Barclays‘s price objective would suggest a potential upside of 12.00% from the company’s current price.

Several other equities research analysts also recently weighed in on the stock. Morgan Stanley lifted their price target on shares of Kinder Morgan from $20.00 to $21.00 and gave the company an “underweight” rating in a research note on Monday, January 9th. StockNews.com started coverage on Kinder Morgan in a research note on Wednesday, October 12th. They set a “hold” rating on the stock. Citigroup initiated coverage on Kinder Morgan in a report on Thursday, December 8th. They issued a “neutral” rating and a $19.00 price target on the stock. Wells Fargo & Company decreased their price objective on Kinder Morgan from $20.00 to $18.00 and set an “equal weight” rating for the company in a report on Tuesday, October 25th. Finally, TD Securities cut their target price on Kinder Morgan from $23.00 to $21.00 and set a “buy” rating on the stock in a report on Thursday, October 20th. Two research analysts have rated the stock with a sell rating, six have assigned a hold rating and one has assigned a buy rating to the company. According to data from MarketBeat, the company presently has an average rating of “Hold” and an average target price of $20.44.

Want More Great Investing Ideas?
Kinder Morgan (NYSE:KMI – Get Rating) last posted its quarterly earnings results on Wednesday, January 18th. The pipeline company reported $0.30 earnings per share (EPS) for the quarter, hitting analysts’ consensus estimates of $0.30. The firm had revenue of $4.58 billion for the quarter, compared to analysts’ expectations of $4.86 billion. Kinder Morgan had a return on equity of 7.97% and a net margin of 13.20%. The company’s revenue for the quarter was up 3.5% compared to the same quarter last year. During the same period in the prior year, the business earned $0.27 EPS. Research analysts expect that Kinder Morgan will post 1.15 earnings per share for the current year.

In related news, VP John W. Schlosser sold 1,500 shares of the business’s stock in a transaction dated Thursday, October 27th. The shares were sold at an average price of $18.00, for a total transaction of $27,000.00. Following the transaction, the vice president now directly owns 24,219 shares in the company, valued at $435,942. The transaction was disclosed in a filing with the SEC, which can be accessed through the SEC website. Insiders sold a total of 4,500 shares of company stock worth $82,320 over the last quarter. Insiders own 12.51% of the company’s stock. 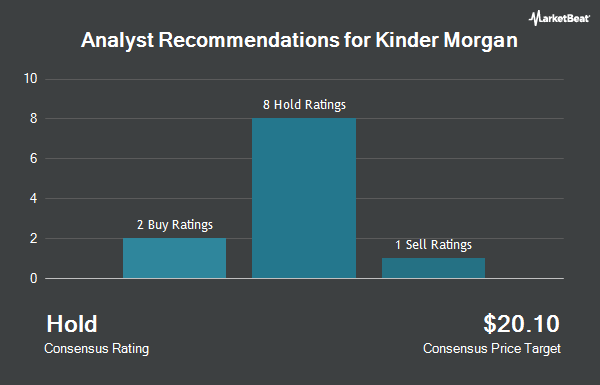 Complete the form below to receive the latest headlines and analysts' recommendations for Kinder Morgan with our free daily email newsletter: