Raymond James Financial Services Advisors Inc. cut its stake in REGENXBIO Inc. (NASDAQ:RGNX – Get Rating) by 2.2% in the third quarter, according to its most recent 13F filing with the Securities & Exchange Commission. The institutional investor owned 54,935 shares of the biotechnology company’s stock after selling 1,259 shares during the period. Raymond James Financial Services Advisors Inc.’s holdings in REGENXBIO were worth $1,452,000 as of its most recent filing with the Securities & Exchange Commission.

REGENXBIO (NASDAQ:RGNX – Get Rating) last released its quarterly earnings results on Thursday, November 3rd. The biotechnology company reported ($1.75) earnings per share for the quarter, missing analysts’ consensus estimates of ($1.55) by ($0.20). The business had revenue of $26.51 million during the quarter, compared to analyst estimates of $29.77 million. REGENXBIO had a return on equity of 12.22% and a net margin of 15.34%. On average, analysts anticipate that REGENXBIO Inc. will post -5.7 earnings per share for the current fiscal year.

REGENXBIO Inc, a clinical-stage biotechnology company, provides gene therapy product candidates to deliver genes to cells to address genetic defects or to enable cells in the body to produce therapeutic proteins or antibodies that are intended to impact disease. Its gene therapy product candidates are based on NAV Technology Platform, a proprietary adeno-associated virus gene delivery platform.

Want to see what other hedge funds are holding RGNX? Visit HoldingsChannel.com to get the latest 13F filings and insider trades for REGENXBIO Inc. (NASDAQ:RGNX – Get Rating). 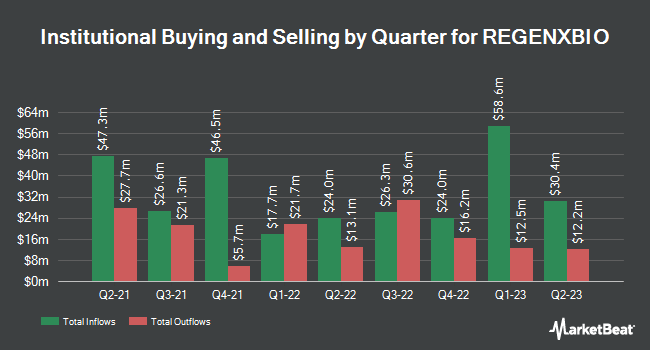 Complete the form below to receive the latest headlines and analysts' recommendations for REGENXBIO with our free daily email newsletter: