Van ECK Associates Corp reduced its stake in shares of SITE Centers Corp. (NYSE:SITC – Get Rating) by 36.5% in the 3rd quarter, HoldingsChannel reports. The firm owned 11,227 shares of the company’s stock after selling 6,440 shares during the quarter. Van ECK Associates Corp’s holdings in SITE Centers were worth $120,000 at the end of the most recent reporting period.

Want More Great Investing Ideas?
The firm also recently declared a quarterly dividend, which was paid on Friday, January 6th. Investors of record on Friday, December 9th were given a dividend of $0.13 per share. The ex-dividend date of this dividend was Thursday, December 8th. This represents a $0.52 dividend on an annualized basis and a yield of 4.07%. SITE Centers’s dividend payout ratio (DPR) is 59.09%.

In related news, EVP John M. Cattonar sold 11,000 shares of the company’s stock in a transaction on Tuesday, December 27th. The shares were sold at an average price of $13.61, for a total transaction of $149,710.00. Following the completion of the sale, the executive vice president now directly owns 40,922 shares of the company’s stock, valued at approximately $556,948.42. The sale was disclosed in a filing with the SEC, which can be accessed through the SEC website. 9.80% of the stock is owned by corporate insiders.

Want to see what other hedge funds are holding SITC? Visit HoldingsChannel.com to get the latest 13F filings and insider trades for SITE Centers Corp. (NYSE:SITC – Get Rating). 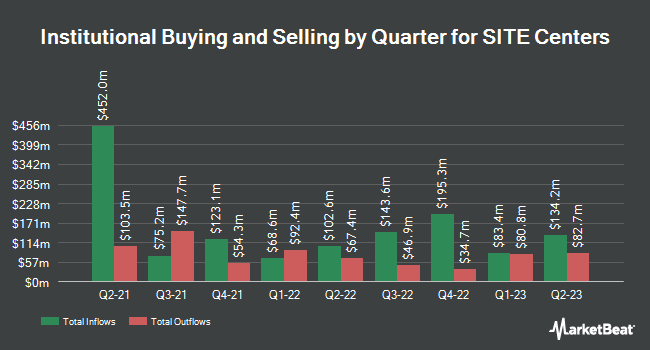