Strs Ohio reduced its stake in shares of Groupon, Inc. (NASDAQ:GRPN – Get Rating) by 7.9% during the third quarter, according to the company in its most recent 13F filing with the Securities and Exchange Commission. The firm owned 37,200 shares of the coupon company’s stock after selling 3,200 shares during the quarter. Strs Ohio’s holdings in Groupon were worth $296,000 at the end of the most recent reporting period.

Insider Buying and Selling at Groupon

In other Groupon news, Director Jan Barta purchased 6,716,966 shares of Groupon stock in a transaction dated Tuesday, December 20th. The stock was purchased at an average price of $7.28 per share, with a total value of $48,899,512.48. Following the transaction, the director now directly owns 6,716,966 shares of the company’s stock, valued at $48,899,512.48. The purchase was disclosed in a document filed with the SEC, which is available through this link. Company insiders own 15.90% of the company’s stock.

Groupon (NASDAQ:GRPN – Get Rating) last posted its earnings results on Monday, November 7th. The coupon company reported ($0.89) earnings per share (EPS) for the quarter, beating the consensus estimate of ($1.21) by $0.32. The business had revenue of $144.39 million for the quarter, compared to analysts’ expectations of $174.60 million. Groupon had a negative net margin of 22.68% and a negative return on equity of 48.33%. Sell-side analysts anticipate that Groupon, Inc. will post -3.29 EPS for the current fiscal year.

Groupon, Inc, together with its subsidiaries, operates a marketplace that connects consumers to merchants. It operates in two segments, North America and International. The company sells goods or services on behalf of third-party merchants; and first-party goods inventory. It serves customers through its mobile applications and websites.

Want to see what other hedge funds are holding GRPN? Visit HoldingsChannel.com to get the latest 13F filings and insider trades for Groupon, Inc. (NASDAQ:GRPN – Get Rating). 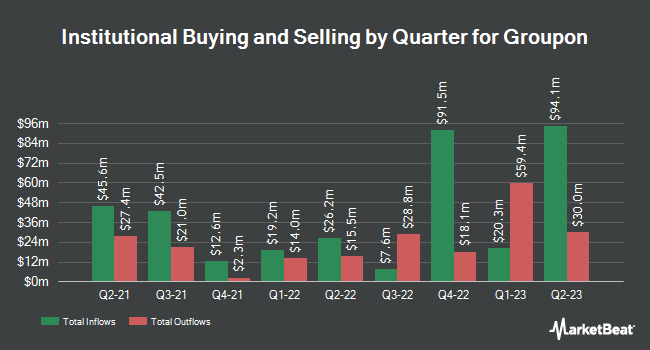 Receive News & Ratings for Groupon Daily - Enter your email address below to receive a concise daily summary of the latest news and analysts' ratings for Groupon and related companies with MarketBeat.com's FREE daily email newsletter.

Complete the form below to receive the latest headlines and analysts' recommendations for Groupon with our free daily email newsletter: