Triumph Group (NYSE:TGI – Get Rating) had its price target lowered by research analysts at The Goldman Sachs Group from $14.00 to $12.00 in a research note issued on Wednesday, Benzinga reports. The brokerage currently has a “neutral” rating on the aerospace company’s stock. The Goldman Sachs Group’s target price would suggest a potential upside of 27.39% from the stock’s current price.

Want More Great Investing Ideas?
Triumph Group (NYSE:TGI – Get Rating) last announced its earnings results on Tuesday, November 8th. The aerospace company reported $0.07 EPS for the quarter, topping the consensus estimate of ($0.04) by $0.11. The firm had revenue of $307.60 million for the quarter, compared to the consensus estimate of $297.57 million. Triumph Group had a net margin of 6.81% and a negative return on equity of 6.67%. The business’s quarterly revenue was down 13.9% on a year-over-year basis. During the same period last year, the company posted $0.10 EPS. Equities research analysts expect that Triumph Group will post 0.51 earnings per share for the current year. 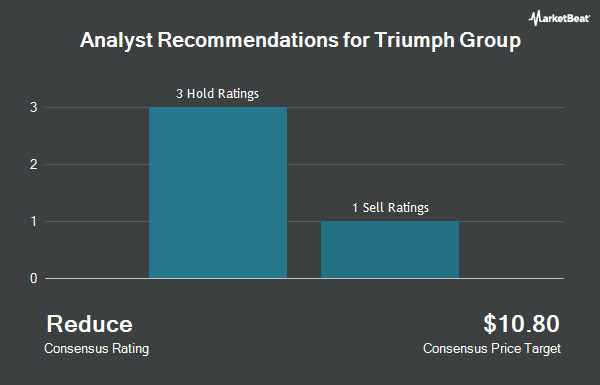