Want More Great Investing Ideas?
Lancaster Colony (NASDAQ:LANC – Get Rating) last posted its quarterly earnings data on Thursday, November 3rd. The company reported $1.36 earnings per share (EPS) for the quarter, topping the consensus estimate of $1.22 by $0.14. Lancaster Colony had a return on equity of 14.40% and a net margin of 5.64%. The business had revenue of $425.54 million for the quarter, compared to analysts’ expectations of $422.04 million. As a group, analysts anticipate that Lancaster Colony Co. will post 5.69 earnings per share for the current fiscal year.

Separately, StockNews.com started coverage on Lancaster Colony in a report on Wednesday, October 12th. They set a “hold” rating on the stock. Five investment analysts have rated the stock with a hold rating, According to MarketBeat.com, the company has a consensus rating of “Hold” and a consensus target price of $140.00.

Want to see what other hedge funds are holding LANC? Visit HoldingsChannel.com to get the latest 13F filings and insider trades for Lancaster Colony Co. (NASDAQ:LANC – Get Rating). 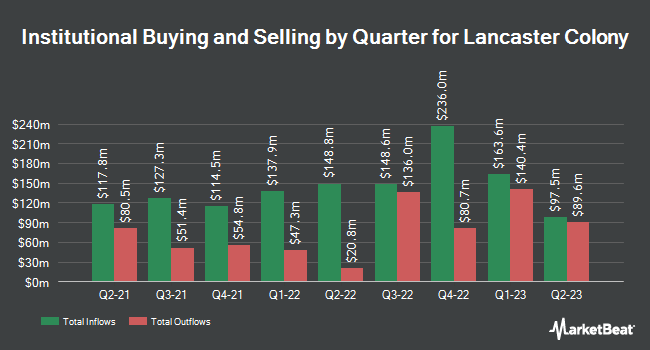 Complete the form below to receive the latest headlines and analysts' recommendations for Lancaster Colony with our free daily email newsletter: