Wipfli Financial Advisors LLC purchased a new position in shares of Community Bank System, Inc. (NYSE:CBU – Get Rating) during the third quarter, according to the company in its most recent disclosure with the Securities and Exchange Commission (SEC). The firm purchased 485 shares of the bank’s stock, valued at approximately $29,000.

Want More Great Investing Ideas?
Community Bank System (NYSE:CBU – Get Rating) last posted its quarterly earnings results on Monday, October 24th. The bank reported $0.90 earnings per share for the quarter, missing the consensus estimate of $0.95 by ($0.05). The company had revenue of $175.64 million for the quarter, compared to analyst estimates of $173.18 million. Community Bank System had a return on equity of 10.56% and a net margin of 26.44%. Equities research analysts expect that Community Bank System, Inc. will post 3.52 earnings per share for the current fiscal year.

The firm also recently announced a quarterly dividend, which was paid on Tuesday, January 10th. Stockholders of record on Thursday, December 15th were paid a dividend of $0.44 per share. The ex-dividend date of this dividend was Wednesday, December 14th. This represents a $1.76 annualized dividend and a dividend yield of 2.93%. Community Bank System’s dividend payout ratio is currently 53.50%.

Community Bank System, Inc operates as the bank holding company for Community Bank, N.A. that provides various banking and other financial services to retail, commercial, and municipal customers. It operates through three segments: Banking, Employee Benefit Services, and All Other. The company offers various deposits products, such as checking, savings, and money market deposit accounts, as well as time deposits.

Want to see what other hedge funds are holding CBU? Visit HoldingsChannel.com to get the latest 13F filings and insider trades for Community Bank System, Inc. (NYSE:CBU – Get Rating). 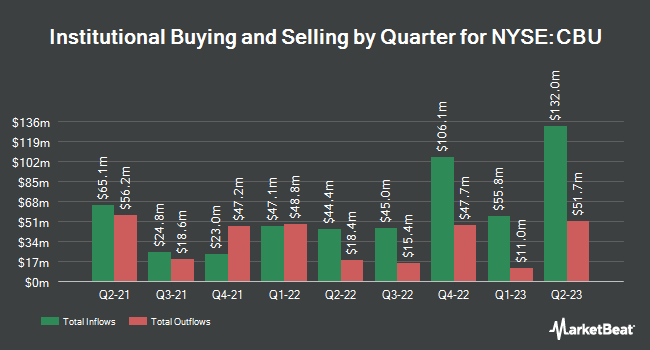 Complete the form below to receive the latest headlines and analysts' recommendations for Community Bank System with our free daily email newsletter: