Cwm LLC boosted its stake in YETI Holdings, Inc. (NYSE:YETI – Get Rating) by 74.5% during the 3rd quarter, according to its most recent Form 13F filing with the Securities and Exchange Commission (SEC). The firm owned 1,591 shares of the company’s stock after buying an additional 679 shares during the period. Cwm LLC’s holdings in YETI were worth $45,000 as of its most recent SEC filing.

YETI (NYSE:YETI – Get Rating) last released its earnings results on Thursday, November 10th. The company reported $0.59 earnings per share for the quarter, topping the consensus estimate of $0.55 by $0.04. YETI had a net margin of 11.97% and a return on equity of 40.06%. The business had revenue of $433.56 million for the quarter, compared to the consensus estimate of $417.76 million. Analysts expect that YETI Holdings, Inc. will post 2.21 earnings per share for the current year.

YETI Holdings, Inc engages in the design, marketing, and distribution of products for the outdoor and recreation market. Its products include coolers, drinkware, travel bags, backpacks, multipurpose buckets, outdoor chairs, blankets, dog bowls, apparel, and accessories. The company was founded by Roy J.

Want to see what other hedge funds are holding YETI? Visit HoldingsChannel.com to get the latest 13F filings and insider trades for YETI Holdings, Inc. (NYSE:YETI – Get Rating). 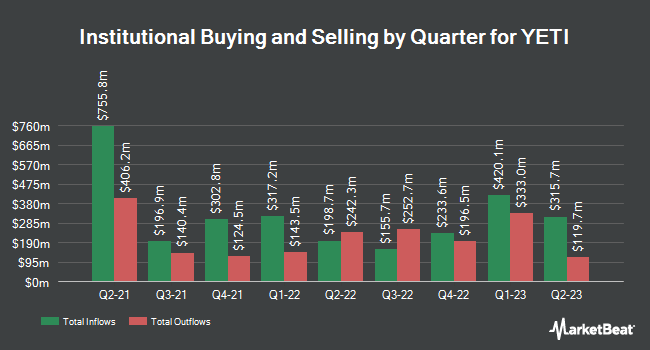