Charles Schwab (NYSE:SCHW – Get Rating) had its price target cut by equities research analysts at Barclays from $92.00 to $87.00 in a research note issued on Thursday, Benzinga reports. The brokerage currently has an “equal weight” rating on the financial services provider’s stock. Barclays‘s price target would suggest a potential upside of 12.94% from the company’s current price.

Want More Great Investing Ideas?
Charles Schwab (NYSE:SCHW – Get Rating) last announced its quarterly earnings data on Wednesday, January 18th. The financial services provider reported $1.07 earnings per share for the quarter, missing the consensus estimate of $1.09 by ($0.02). The company had revenue of $5.50 billion during the quarter, compared to the consensus estimate of $5.55 billion. Charles Schwab had a net margin of 34.02% and a return on equity of 20.59%. Charles Schwab’s revenue was up 16.8% on a year-over-year basis. During the same quarter in the previous year, the business earned $0.86 EPS. As a group, sell-side analysts predict that Charles Schwab will post 3.92 earnings per share for the current fiscal year. 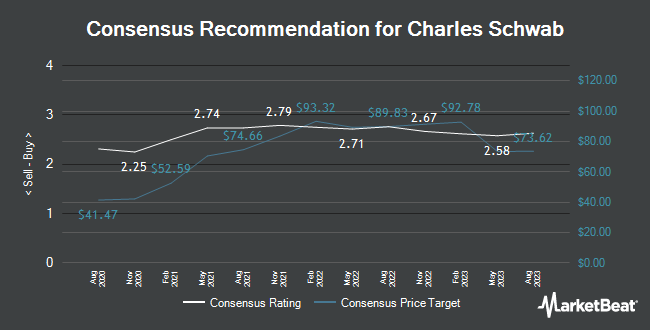