Fox Co. (NASDAQ:FOXA – Get Rating) – Analysts at KeyCorp lifted their FY2024 earnings per share estimates for FOX in a report issued on Tuesday, January 17th. KeyCorp analyst B. Nispel now forecasts that the company will earn $3.26 per share for the year, up from their previous forecast of $3.09. The consensus estimate for FOX’s current full-year earnings is $3.55 per share.

FOX (NASDAQ:FOXA – Get Rating) last announced its quarterly earnings results on Tuesday, November 1st. The company reported $1.21 earnings per share (EPS) for the quarter, topping the consensus estimate of $1.15 by $0.06. FOX had a return on equity of 14.24% and a net margin of 7.85%. The company had revenue of $3.19 billion during the quarter, compared to the consensus estimate of $3.20 billion.

Fox Corporation operates as a news, sports, and entertainment company in the United States (U.S.). The company operates through Cable Network Programming; Television; and Other, Corporate and Eliminations segments. The Cable Network Programming segment produces and licenses news, business news, and sports content for distribution through traditional and virtual multi-channel video programming distributors (MVPDs) and other digital platforms, primarily in the U.S. 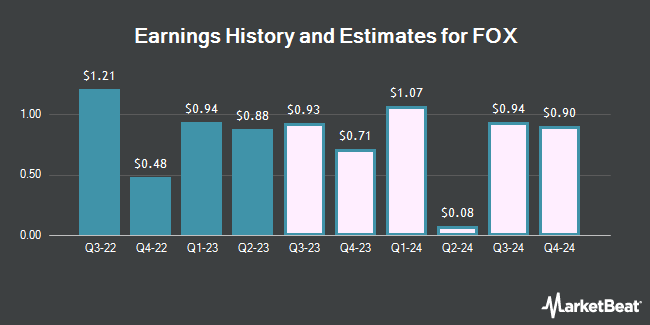