US Bancorp DE grew its position in shares of First Citizens BancShares, Inc. (NASDAQ:FCNCA – Get Rating) by 16.1% during the third quarter, according to the company in its most recent 13F filing with the Securities & Exchange Commission. The fund owned 821 shares of the bank’s stock after buying an additional 114 shares during the period. US Bancorp DE’s holdings in First Citizens BancShares were worth $656,000 as of its most recent SEC filing.

In other news, insider Jeffery L. Ward bought 1,600 shares of the business’s stock in a transaction on Tuesday, December 13th. The stock was purchased at an average cost of $19.93 per share, for a total transaction of $31,888.00. Following the completion of the transaction, the insider now directly owns 5,600 shares of the company’s stock, valued at approximately $111,608. The acquisition was disclosed in a document filed with the Securities & Exchange Commission, which can be accessed through this hyperlink. 13.40% of the stock is owned by insiders.

The business also recently disclosed a quarterly dividend, which was paid on Thursday, December 15th. Investors of record on Wednesday, November 30th were paid a dividend of $0.75 per share. This is a boost from First Citizens BancShares’s previous quarterly dividend of $0.47. This represents a $3.00 dividend on an annualized basis and a dividend yield of 0.38%. The ex-dividend date of this dividend was Tuesday, November 29th. First Citizens BancShares’s payout ratio is currently 4.77%.

FCNCA has been the topic of several recent research reports. DA Davidson downgraded First Citizens BancShares from a “buy” rating to a “neutral” rating and set a $950.00 price target on the stock. in a report on Thursday, October 6th. StockNews.com started coverage on First Citizens BancShares in a research note on Wednesday, October 12th. They issued a “hold” rating on the stock.

First Citizens BancShares, Inc is a bank holding company, which provides retail and commercial banking services through its subsidiaries. The company operates under the following segments: General Banking, Commercial Banking, Rail, and Corporate. The General Banking delivers services to individuals through branch networks. 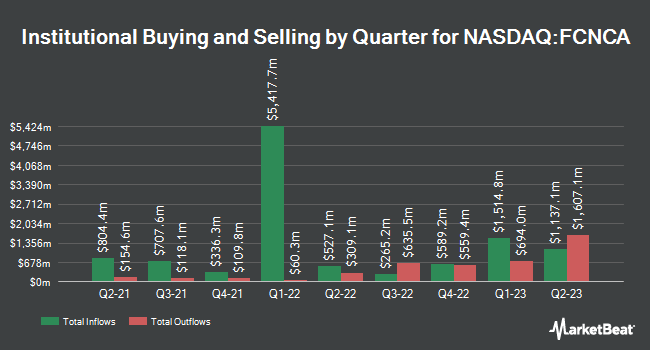