Toyota Motor Co. (NYSE:TM – Get Rating) – Research analysts at Jefferies Financial Group upped their FY2023 earnings per share (EPS) estimates for Toyota Motor in a research note issued to investors on Tuesday, January 17th. Jefferies Financial Group analyst T. Nakanishi now expects that the company will earn $14.41 per share for the year, up from their prior forecast of $14.29. The consensus estimate for Toyota Motor’s current full-year earnings is $14.16 per share.

Toyota Motor (NYSE:TM – Get Rating) last released its quarterly earnings data on Tuesday, November 1st. The company reported $2.30 earnings per share for the quarter, missing analysts’ consensus estimates of $3.08 by ($0.78). The business had revenue of $66.77 billion during the quarter, compared to the consensus estimate of $63.08 billion. Toyota Motor had a return on equity of 9.11% and a net margin of 7.54%.

Toyota Motor Corporation designs, manufactures, assembles, and sells passenger vehicles, minivans and commercial vehicles, and related parts and accessories. It operates in Automotive, Financial Services, and All Other segments. The company offers hybrid cars under the Prius name, fuel cell vehicles under the MIRAI name; and conventional engine vehicles, including subcompact and compact cars under the Corolla and Raize names. 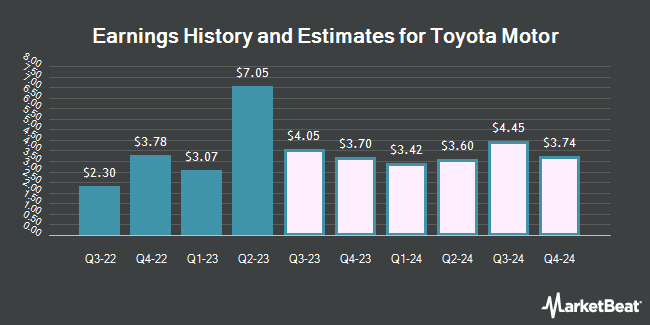 Complete the form below to receive the latest headlines and analysts' recommendations for Toyota Motor with our free daily email newsletter: