Raymond James Financial Services Advisors Inc. lessened its holdings in shares of Mirum Pharmaceuticals, Inc. (NASDAQ:MIRM – Get Rating) by 23.6% in the third quarter, HoldingsChannel reports. The fund owned 50,277 shares of the company’s stock after selling 15,542 shares during the period. Raymond James Financial Services Advisors Inc.’s holdings in Mirum Pharmaceuticals were worth $1,056,000 as of its most recent filing with the SEC.

Want More Great Investing Ideas?
In related news, Director Niall O’donnell sold 32,109 shares of the company’s stock in a transaction on Monday, November 14th. The stock was sold at an average price of $19.60, for a total transaction of $629,336.40. Following the transaction, the director now directly owns 1,714,888 shares of the company’s stock, valued at $33,611,804.80. The transaction was disclosed in a legal filing with the Securities & Exchange Commission, which can be accessed through this link. 33.27% of the stock is owned by insiders.

Mirum Pharmaceuticals, Inc is a biopharmaceutical company. The firm focuses on the development and commercialization of a late-stage pipeline of novel therapies for debilitating liver diseases. Its products include Maralixibat and Volixibat. The company was founded by Niall O’Donnel, Michael Grey and Christopher Peetz in May 2018 and is headquartered in Foster City, CA.

Want to see what other hedge funds are holding MIRM? Visit HoldingsChannel.com to get the latest 13F filings and insider trades for Mirum Pharmaceuticals, Inc. (NASDAQ:MIRM – Get Rating). 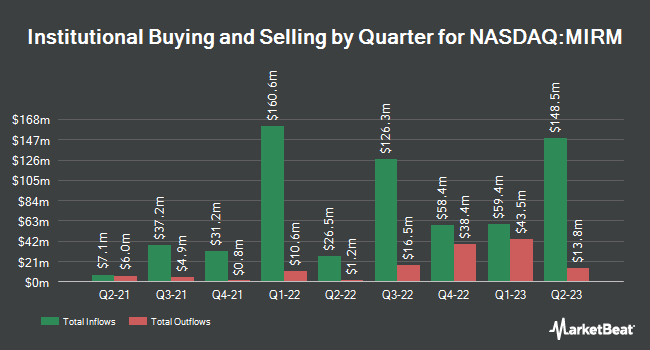