Research analysts at Benchmark initiated coverage on shares of Patterson-UTI Energy (NASDAQ:PTEN – Get Rating) in a report issued on Thursday, The Fly reports. The firm set a “hold” rating on the oil and gas company’s stock.

Want More Great Investing Ideas?
Patterson-UTI Energy (NASDAQ:PTEN – Get Rating) last released its quarterly earnings results on Wednesday, October 26th. The oil and gas company reported $0.28 earnings per share (EPS) for the quarter, beating analysts’ consensus estimates of $0.19 by $0.09. Patterson-UTI Energy had a negative net margin of 13.21% and a negative return on equity of 2.60%. The company had revenue of $727.50 million during the quarter, compared to analysts’ expectations of $683.88 million. As a group, equities research analysts anticipate that Patterson-UTI Energy will post 0.64 EPS for the current year.

In related news, insider James Michael Holcomb sold 58,335 shares of the firm’s stock in a transaction that occurred on Friday, November 4th. The shares were sold at an average price of $18.65, for a total value of $1,087,947.75. Following the completion of the sale, the insider now owns 273,108 shares of the company’s stock, valued at $5,093,464.20. The sale was disclosed in a document filed with the SEC, which is accessible through the SEC website. 2.70% of the stock is currently owned by company insiders. 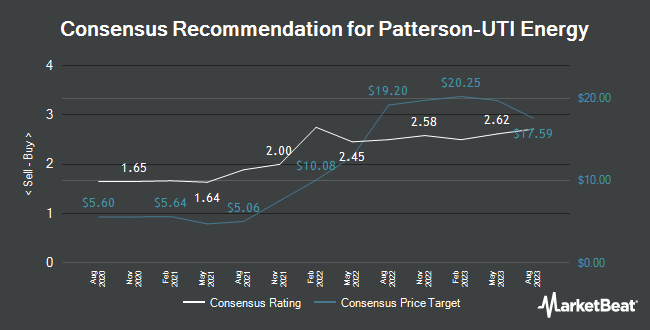