Strs Ohio grew its holdings in shares of 23andMe Holding Co. (NASDAQ:ME – Get Rating) by 102.8% in the third quarter, according to its most recent Form 13F filing with the Securities and Exchange Commission (SEC). The fund owned 81,100 shares of the company’s stock after buying an additional 41,100 shares during the quarter. Strs Ohio’s holdings in 23andMe were worth $231,000 at the end of the most recent reporting period.

Want More Great Investing Ideas?
23andMe (NASDAQ:ME – Get Rating) last announced its quarterly earnings data on Monday, November 7th. The company reported ($0.15) EPS for the quarter. The company had revenue of $75.66 million during the quarter, compared to the consensus estimate of $63.40 million. 23andMe had a negative return on equity of 33.82% and a negative net margin of 105.68%.

ME has been the topic of several analyst reports. Credit Suisse Group cut their price target on shares of 23andMe from $7.00 to $6.00 and set an “outperform” rating on the stock in a report on Tuesday, November 8th. Berenberg Bank began coverage on shares of 23andMe in a research report on Monday, November 28th. They issued a “buy” rating and a $7.00 price objective on the stock. One analyst has rated the stock with a hold rating and four have assigned a buy rating to the company. Based on data from MarketBeat.com, the company presently has a consensus rating of “Moderate Buy” and a consensus target price of $5.60.

In other news, insider Kathy L. Hibbs sold 26,259 shares of the business’s stock in a transaction that occurred on Monday, December 5th. The shares were sold at an average price of $3.25, for a total value of $85,341.75. Following the sale, the insider now owns 235,829 shares of the company’s stock, valued at $766,444.25. The transaction was disclosed in a legal filing with the SEC, which is accessible through the SEC website. Insiders own 28.82% of the company’s stock.

23andMe Holding Co operates as a consumer genetics testing company. It operates through two segments, Consumer & Research Services and Therapeutics. The Consumer & Research Services segment provides a suite of genetic reports, including information on customers' genetic ancestral origins, personal genetic health risks, and chances of passing on certain rare carrier conditions to their children, as well as reports on how genetics can impact responses to medications based on genetic testing of a saliva sample through its spit kit.

Want to see what other hedge funds are holding ME? Visit HoldingsChannel.com to get the latest 13F filings and insider trades for 23andMe Holding Co. (NASDAQ:ME – Get Rating). 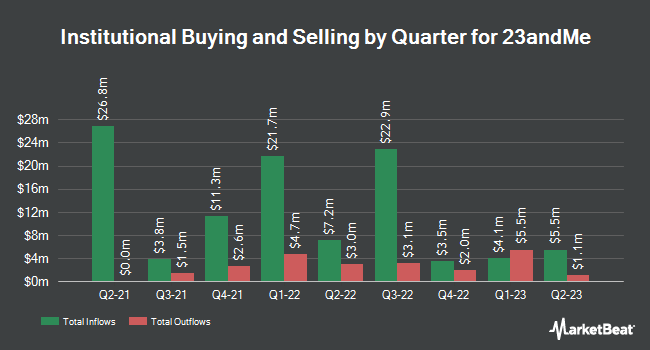 Receive News & Ratings for 23andMe Daily - Enter your email address below to receive a concise daily summary of the latest news and analysts' ratings for 23andMe and related companies with MarketBeat.com's FREE daily email newsletter.

Q3 2023 EPS Estimates for T-Mobile US, Inc. Lifted by KeyCorp

Complete the form below to receive the latest headlines and analysts' recommendations for 23andMe with our free daily email newsletter: