Strs Ohio lowered its position in The Aaron’s Company, Inc. (NYSE:AAN – Get Rating) by 54.3% in the 3rd quarter, according to its most recent 13F filing with the SEC. The institutional investor owned 18,900 shares of the company’s stock after selling 22,500 shares during the period. Strs Ohio’s holdings in Aaron’s were worth $183,000 as of its most recent SEC filing.

Want More Great Investing Ideas?
Aaron’s (NYSE:AAN – Get Rating) last issued its earnings results on Monday, October 24th. The company reported $0.31 EPS for the quarter, beating the consensus estimate of $0.16 by $0.15. Aaron’s had a return on equity of 11.32% and a net margin of 0.80%. The business had revenue of $593.40 million for the quarter, compared to the consensus estimate of $558.54 million. During the same period last year, the business posted $0.83 EPS. The company’s revenue was up 31.2% compared to the same quarter last year. Research analysts anticipate that The Aaron’s Company, Inc. will post 1.98 earnings per share for the current fiscal year.

The firm also recently announced a quarterly dividend, which was paid on Thursday, January 5th. Shareholders of record on Thursday, December 15th were paid a dividend of $0.112 per share. The ex-dividend date was Wednesday, December 14th. This represents a $0.45 annualized dividend and a yield of 3.16%. Aaron’s’s dividend payout ratio is 90.00%.

Headquartered in Atlanta, The Aaron’s Company, Inc (NYSE: AAN) is a leading, technology-enabled, omnichannel provider of lease-purchase solutions. Aaron’s engages in direct-to-consumer sales and lease ownership of furniture, appliances, consumer electronics and accessories through its approximately 1,300 company-operated and franchised stores in 47 states and Canada, as well as its e-commerce platform, Aarons.com.

Want to see what other hedge funds are holding AAN? Visit HoldingsChannel.com to get the latest 13F filings and insider trades for The Aaron’s Company, Inc. (NYSE:AAN – Get Rating). 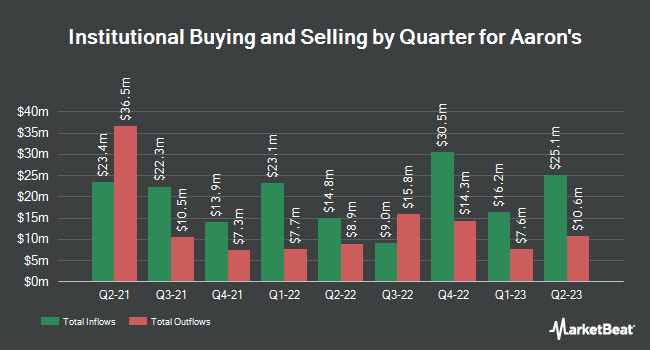 Receive News & Ratings for Aaron's Daily - Enter your email address below to receive a concise daily summary of the latest news and analysts' ratings for Aaron's and related companies with MarketBeat.com's FREE daily email newsletter.

Complete the form below to receive the latest headlines and analysts' recommendations for Aaron's with our free daily email newsletter: