Van ECK Associates Corp bought a new position in shares of Embecta Corp. (NASDAQ:EMBC – Get Rating) during the third quarter, according to its most recent disclosure with the Securities & Exchange Commission. The institutional investor bought 1,537 shares of the company’s stock, valued at approximately $44,000.

Separately, Morgan Stanley downgraded Embecta from an “equal weight” rating to an “underweight” rating and set a $28.00 price target for the company. in a report on Friday, January 6th.

Embecta (NASDAQ:EMBC – Get Rating) last announced its quarterly earnings results on Tuesday, December 20th. The company reported $0.73 earnings per share (EPS) for the quarter, topping the consensus estimate of $0.67 by $0.06. Embecta had a negative return on equity of 52.41% and a net margin of 19.80%. The business had revenue of $274.60 million during the quarter, compared to the consensus estimate of $263.88 million. On average, research analysts anticipate that Embecta Corp. will post 1.9 earnings per share for the current year.

The firm also recently disclosed a quarterly dividend, which was paid on Wednesday, January 11th. Shareholders of record on Friday, December 30th were paid a $0.15 dividend. The ex-dividend date was Thursday, December 29th. This represents a $0.60 dividend on an annualized basis and a yield of 2.53%.

Embecta Corp., a medical device company, focuses on the provision of various solutions to enhance the health and wellbeing of people living with diabetes. Its products include pen needles, syringes, and safety devices, as well as digital applications to assist people with managing their diabetes. The company primarily sells its products to wholesalers and distributors in the United States and internationally.

Want to see what other hedge funds are holding EMBC? Visit HoldingsChannel.com to get the latest 13F filings and insider trades for Embecta Corp. (NASDAQ:EMBC – Get Rating). 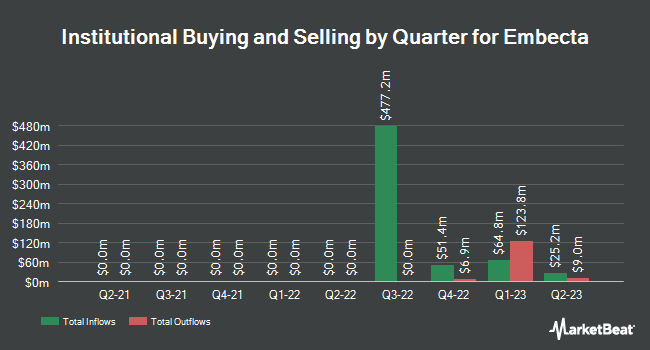 Receive News & Ratings for Embecta Daily - Enter your email address below to receive a concise daily summary of the latest news and analysts' ratings for Embecta and related companies with MarketBeat.com's FREE daily email newsletter.

Complete the form below to receive the latest headlines and analysts' recommendations for Embecta with our free daily email newsletter: