Vericel Co. (NASDAQ:VCEL) Given Average Recommendation of “Hold” by Brokerages

In related news, CEO Dominick Colangelo sold 39,938 shares of the firm’s stock in a transaction that occurred on Tuesday, January 10th. The stock was sold at an average price of $27.13, for a total transaction of $1,083,517.94. Following the completion of the transaction, the chief executive officer now owns 157,066 shares in the company, valued at approximately $4,261,200.58. The transaction was disclosed in a filing with the Securities & Exchange Commission, which is available through this link. 5.20% of the stock is owned by corporate insiders.

Institutional Investors Weigh In On Vericel

Vericel (NASDAQ:VCEL – Get Rating) last announced its quarterly earnings data on Wednesday, November 9th. The biotechnology company reported ($0.14) EPS for the quarter, missing analysts’ consensus estimates of ($0.12) by ($0.02). Vericel had a negative return on equity of 10.41% and a negative net margin of 11.36%. The firm had revenue of $38.55 million during the quarter, compared to the consensus estimate of $40.02 million. Analysts anticipate that Vericel will post -0.45 EPS for the current year.

Vericel Corporation, a commercial-stage biopharmaceutical company, engages in the research, development, manufacture, and distribution of cellular therapies for sports medicine and severe burn care markets in the United States. The company markets autologous cell therapy products comprising MACI, an autologous cellularized scaffold product for the repair of symptomatic, and single or multiple full-thickness cartilage defects of the knee; and Epicel, a permanent skin replacement humanitarian use device for the treatment of adult and pediatric patients with deep-dermal or full-thickness burns. 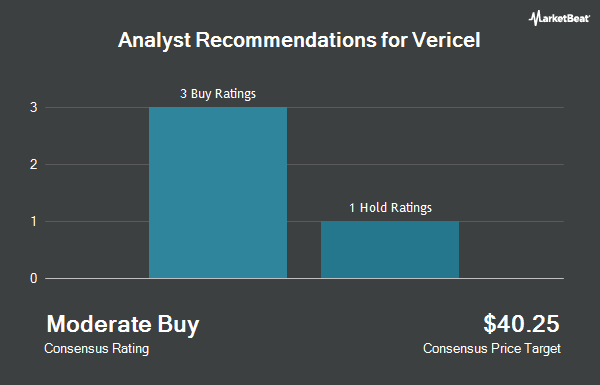 Receive News & Ratings for Vericel Daily - Enter your email address below to receive a concise daily summary of the latest news and analysts' ratings for Vericel and related companies with MarketBeat.com's FREE daily email newsletter.

Complete the form below to receive the latest headlines and analysts' recommendations for Vericel with our free daily email newsletter: