Allspring Global Investments Holdings LLC boosted its position in Phibro Animal Health Co. (NASDAQ:PAHC – Get Rating) by 406.0% in the 3rd quarter, Holdings Channel reports. The fund owned 70,303 shares of the company’s stock after purchasing an additional 56,410 shares during the period. Allspring Global Investments Holdings LLC’s holdings in Phibro Animal Health were worth $934,000 at the end of the most recent quarter.

The company also recently disclosed a quarterly dividend, which was paid on Wednesday, December 21st. Shareholders of record on Wednesday, November 30th were issued a $0.12 dividend. The ex-dividend date of this dividend was Tuesday, November 29th. This represents a $0.48 dividend on an annualized basis and a yield of 3.13%. Phibro Animal Health’s dividend payout ratio is currently 41.74%.

Several brokerages have recently issued reports on PAHC. StockNews.com cut shares of Phibro Animal Health from a “buy” rating to a “hold” rating in a research note on Friday, November 11th. Morgan Stanley reduced their target price on shares of Phibro Animal Health from $21.00 to $20.00 and set an “equal weight” rating on the stock in a report on Thursday, November 10th. Finally, Roth Capital started coverage on shares of Phibro Animal Health in a report on Wednesday, December 21st. They set a “buy” rating and a $18.00 target price on the stock. One research analyst has rated the stock with a sell rating, two have assigned a hold rating and one has given a buy rating to the company. According to data from MarketBeat, the company presently has an average rating of “Hold” and a consensus price target of $18.33.

Want to see what other hedge funds are holding PAHC? Visit HoldingsChannel.com to get the latest 13F filings and insider trades for Phibro Animal Health Co. (NASDAQ:PAHC – Get Rating). 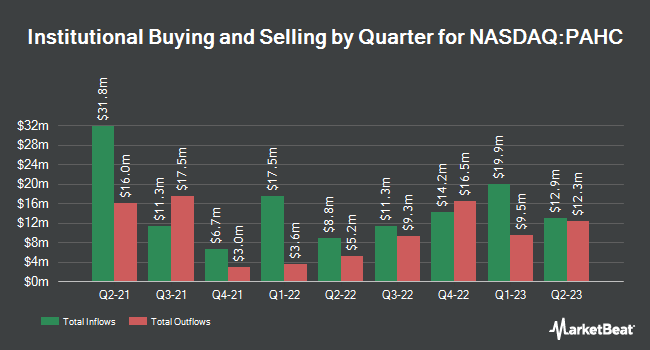 Complete the form below to receive the latest headlines and analysts' recommendations for Phibro Animal Health with our free daily email newsletter: