New York State Teachers Retirement System cut its stake in Conn’s, Inc. (NASDAQ:CONN – Get Rating) by 21.3% during the 3rd quarter, according to its most recent Form 13F filing with the Securities and Exchange Commission (SEC). The firm owned 12,185 shares of the specialty retailer’s stock after selling 3,305 shares during the quarter. New York State Teachers Retirement System’s holdings in Conn’s were worth $86,000 at the end of the most recent quarter.

Want More Great Investing Ideas?
Conn’s (NASDAQ:CONN – Get Rating) last released its quarterly earnings data on Tuesday, December 6th. The specialty retailer reported ($0.78) earnings per share for the quarter, topping the consensus estimate of ($0.85) by $0.07. The firm had revenue of $321.20 million for the quarter, compared to analyst estimates of $317.62 million. Conn’s had a negative net margin of 0.63% and a negative return on equity of 0.32%. Research analysts expect that Conn’s, Inc. will post -1.29 earnings per share for the current year.

Several analysts recently issued reports on CONN shares. Stephens cut their price target on shares of Conn’s from $13.00 to $9.00 and set an “equal weight” rating on the stock in a report on Wednesday, December 7th. TheStreet cut shares of Conn’s from a “c-” rating to a “d” rating in a research report on Tuesday, December 6th. Finally, StockNews.com upgraded Conn’s from a “sell” rating to a “hold” rating in a research note on Thursday, December 15th. Three research analysts have rated the stock with a hold rating and one has issued a buy rating to the company. According to MarketBeat.com, the stock has an average rating of “Hold” and an average target price of $16.50.

In related news, Director Douglas H. Martin acquired 4,000 shares of Conn’s stock in a transaction that occurred on Tuesday, December 27th. The stock was acquired at an average price of $6.35 per share, for a total transaction of $25,400.00. Following the transaction, the director now directly owns 64,042 shares of the company’s stock, valued at approximately $406,666.70. The transaction was disclosed in a document filed with the SEC, which can be accessed through this link. Corporate insiders own 6.64% of the company’s stock.

Want to see what other hedge funds are holding CONN? Visit HoldingsChannel.com to get the latest 13F filings and insider trades for Conn’s, Inc. (NASDAQ:CONN – Get Rating). 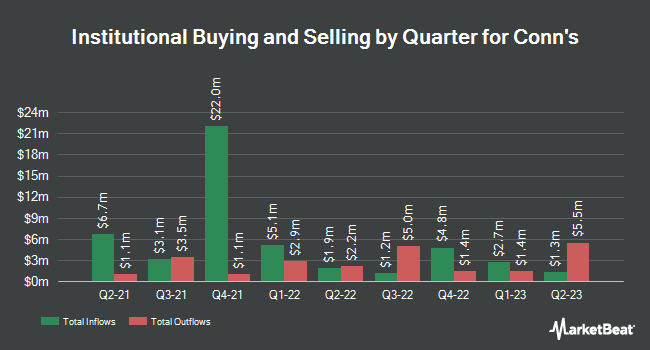