Want More Great Investing Ideas?
Several brokerages have recently commented on CEIX. Benchmark upped their target price on CONSOL Energy from $72.00 to $80.00 in a report on Wednesday, November 2nd. B. Riley dropped their target price on shares of CONSOL Energy from $85.00 to $84.00 in a research report on Tuesday, January 17th.

CONSOL Energy (NYSE:CEIX – Get Rating) last issued its quarterly earnings data on Tuesday, November 1st. The company reported $2.55 earnings per share (EPS) for the quarter, missing analysts’ consensus estimates of $2.93 by ($0.38). CONSOL Energy had a return on equity of 41.36% and a net margin of 20.11%. The business had revenue of $561.64 million during the quarter, compared to the consensus estimate of $463.60 million. Analysts anticipate that CONSOL Energy Inc. will post 11.44 earnings per share for the current fiscal year.

The business also recently declared a quarterly dividend, which was paid on Wednesday, November 23rd. Shareholders of record on Monday, November 14th were issued a dividend of $1.05 per share. The ex-dividend date was Thursday, November 10th. This represents a $4.20 annualized dividend and a yield of 6.70%. CONSOL Energy’s dividend payout ratio (DPR) is presently 38.32%.

CONSOL Energy Inc engages in the production of bituminous coal. It focuses on the extraction and preparation of coal in the Appalachian basin. The firm operates through the following segments: PAMC and CONSOL Marine Terminal. The PAMC segment includes mining, preparation and marketing of thermal coal.

Want to see what other hedge funds are holding CEIX? Visit HoldingsChannel.com to get the latest 13F filings and insider trades for CONSOL Energy Inc. (NYSE:CEIX – Get Rating). 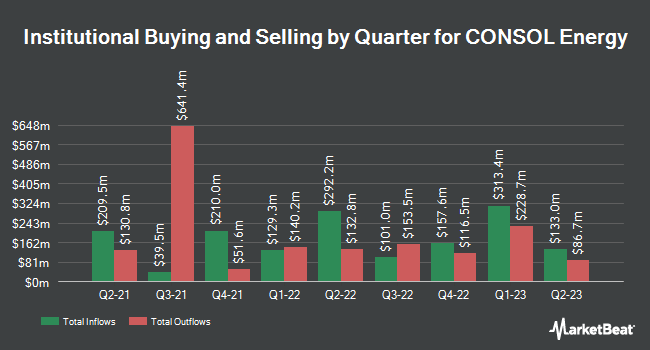 Complete the form below to receive the latest headlines and analysts' recommendations for CONSOL Energy with our free daily email newsletter: