Janney Montgomery Scott LLC increased its position in ChipMOS TECHNOLOGIES INC. (NASDAQ:IMOS – Get Rating) by 7.1% in the third quarter, Holdings Channel.com reports. The firm owned 31,896 shares of the semiconductor company’s stock after acquiring an additional 2,111 shares during the period. Janney Montgomery Scott LLC’s holdings in ChipMOS TECHNOLOGIES were worth $591,000 at the end of the most recent quarter.

ChipMOS TECHNOLOGIES INC. engages in the research, development, manufacture, and sale of high-integration and high-precision integrated circuits, and related assembly and testing services in Taiwan, People's Republic of China, Japan, Singapore, and internationally. It operates through Testing; Assembly; Testing and Assembly for LCD, OLED and other Display Panel Driver Semiconductors; Bumping; and Other segments.

Want to see what other hedge funds are holding IMOS? Visit HoldingsChannel.com to get the latest 13F filings and insider trades for ChipMOS TECHNOLOGIES INC. (NASDAQ:IMOS – Get Rating). 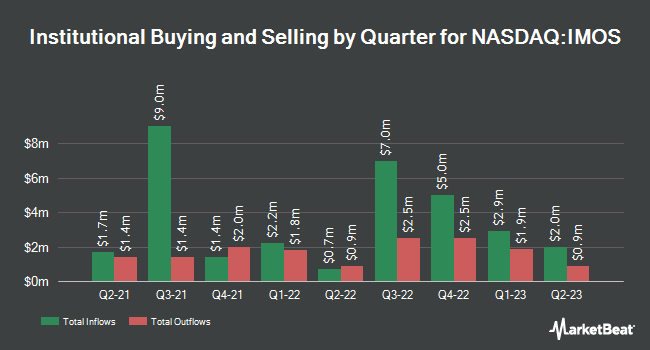 Complete the form below to receive the latest headlines and analysts' recommendations for ChipMOS TECHNOLOGIES with our free daily email newsletter: