Mitsubishi UFJ Kokusai Asset Management Co. Ltd. cut its holdings in NVE Co. (NASDAQ:NVEC – Get Rating) by 1.1% during the third quarter, according to its most recent Form 13F filing with the SEC. The fund owned 19,873 shares of the semiconductor company’s stock after selling 224 shares during the period. Mitsubishi UFJ Kokusai Asset Management Co. Ltd.’s holdings in NVE were worth $927,000 at the end of the most recent reporting period.

Want More Great Investing Ideas?
NVE (NASDAQ:NVEC – Get Rating) last posted its quarterly earnings data on Wednesday, October 19th. The semiconductor company reported $1.26 EPS for the quarter. NVE had a net margin of 56.37% and a return on equity of 27.12%. The business had revenue of $10.72 million during the quarter.

NVE Corp. engages in the development and sale of devices that use spintronics, a nanotechnology that relies on electron spin rather than electron charge to acquire, store, and transmit information. It offers Isolators, sensors, and Power ICs. The company was founded by James M. Daughton in 1989 and is headquartered in Eden Prairie, MN.

Want to see what other hedge funds are holding NVEC? Visit HoldingsChannel.com to get the latest 13F filings and insider trades for NVE Co. (NASDAQ:NVEC – Get Rating). 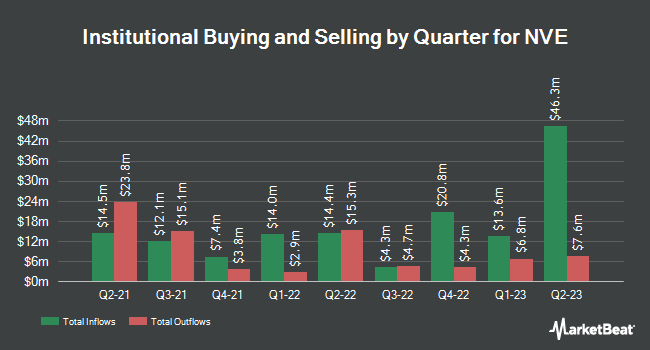 Receive News & Ratings for NVE Daily - Enter your email address below to receive a concise daily summary of the latest news and analysts' ratings for NVE and related companies with MarketBeat.com's FREE daily email newsletter.

Complete the form below to receive the latest headlines and analysts' recommendations for NVE with our free daily email newsletter: