Raymond James & Associates increased its holdings in Teradata Co. (NYSE:TDC – Get Rating) by 17.9% during the third quarter, HoldingsChannel.com reports. The institutional investor owned 78,894 shares of the technology company’s stock after acquiring an additional 11,976 shares during the quarter. Raymond James & Associates’ holdings in Teradata were worth $2,450,000 as of its most recent filing with the Securities and Exchange Commission.

Want More Great Investing Ideas?
Teradata (NYSE:TDC – Get Rating) last posted its earnings results on Monday, November 7th. The technology company reported $0.10 earnings per share for the quarter, hitting the consensus estimate of $0.10. The firm had revenue of $417.00 million during the quarter, compared to analysts’ expectations of $423.10 million. Teradata had a return on equity of 34.61% and a net margin of 4.02%. The firm’s revenue was down 9.3% compared to the same quarter last year. During the same quarter in the previous year, the business earned $0.24 earnings per share. Equities research analysts anticipate that Teradata Co. will post 0.74 earnings per share for the current fiscal year.

Teradata Corp. is the cloud data analytics company which is built for a multi-cloud reality and solving the data challenges at scale. It operates through three operating segments: Americas (North America and Latin America), EMEA (Europe, Middle East and Africa) and APJ (Asia Pacific and Japan) geographic regions.

Want to see what other hedge funds are holding TDC? Visit HoldingsChannel.com to get the latest 13F filings and insider trades for Teradata Co. (NYSE:TDC – Get Rating). 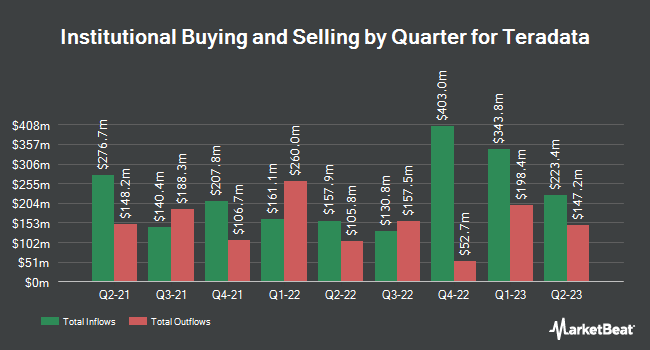 Receive News & Ratings for Teradata Daily - Enter your email address below to receive a concise daily summary of the latest news and analysts' ratings for Teradata and related companies with MarketBeat.com's FREE daily email newsletter.

Complete the form below to receive the latest headlines and analysts' recommendations for Teradata with our free daily email newsletter: