PEBO has been the subject of several analyst reports. StockNews.com raised Peoples Bancorp from a “hold” rating to a “buy” rating in a report on Friday, January 6th. Hovde Group cut Peoples Bancorp from an “outperform” rating to a “market perform” rating and dropped their price objective for the company from $34.00 to $30.00 in a report on Wednesday, October 26th. Five research analysts have rated the stock with a hold rating and two have assigned a buy rating to the company. According to data from MarketBeat, the stock currently has an average rating of “Hold” and an average price target of $33.50.

Peoples Bancorp (NASDAQ:PEBO – Get Rating) last posted its quarterly earnings results on Tuesday, October 25th. The bank reported $0.93 EPS for the quarter, topping analysts’ consensus estimates of $0.83 by $0.10. The company had revenue of $87.80 million during the quarter, compared to analysts’ expectations of $83.85 million. Peoples Bancorp had a return on equity of 13.00% and a net margin of 30.91%. On average, sell-side analysts expect that Peoples Bancorp Inc. will post 3.66 earnings per share for the current fiscal year.

The company also recently disclosed a quarterly dividend, which was paid on Monday, November 21st. Investors of record on Monday, November 7th were given a dividend of $0.38 per share. The ex-dividend date was Friday, November 4th. This represents a $1.52 dividend on an annualized basis and a yield of 5.37%. Peoples Bancorp’s dividend payout ratio is currently 41.87%.

Want to see what other hedge funds are holding PEBO? Visit HoldingsChannel.com to get the latest 13F filings and insider trades for Peoples Bancorp Inc. (NASDAQ:PEBO – Get Rating). 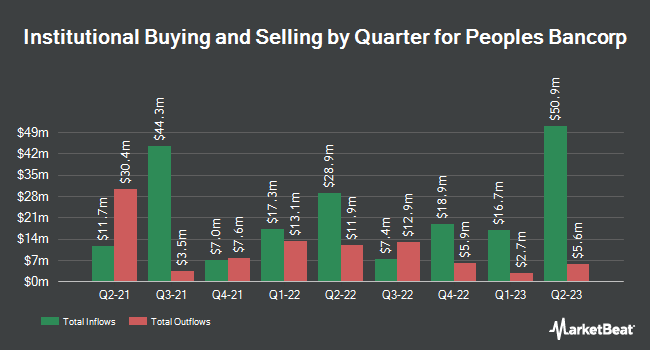 Complete the form below to receive the latest headlines and analysts' recommendations for Peoples Bancorp with our free daily email newsletter: