SG Americas Securities LLC grew its position in Cerus Co. (NASDAQ:CERS – Get Rating) by 16.1% during the 3rd quarter, according to its most recent 13F filing with the SEC. The institutional investor owned 179,775 shares of the biotechnology company’s stock after purchasing an additional 24,909 shares during the period. SG Americas Securities LLC’s holdings in Cerus were worth $647,000 as of its most recent filing with the SEC.

Several brokerages have weighed in on CERS. BTIG Research cut Cerus from a “buy” rating to a “neutral” rating in a report on Friday. StockNews.com started coverage on Cerus in a report on Wednesday, October 12th. They set a “hold” rating for the company. Stephens cut Cerus from an “overweight” rating to an “equal weight” rating and set a $3.75 price target for the company. in a research note on Tuesday, January 17th. Finally, Cantor Fitzgerald reaffirmed an “overweight” rating on shares of Cerus in a research note on Monday, December 5th.

Cerus (NASDAQ:CERS – Get Rating) last posted its earnings results on Thursday, November 3rd. The biotechnology company reported ($0.05) earnings per share (EPS) for the quarter, hitting analysts’ consensus estimates of ($0.05). Cerus had a negative return on equity of 48.32% and a negative net margin of 24.24%. The business had revenue of $39.57 million during the quarter, compared to analysts’ expectations of $39.00 million. Analysts anticipate that Cerus Co. will post -0.21 earnings per share for the current fiscal year.

In other Cerus news, Director Daniel N. Swisher, Jr. sold 12,500 shares of the company’s stock in a transaction that occurred on Thursday, November 10th. The stock was sold at an average price of $3.91, for a total transaction of $48,875.00. Following the completion of the transaction, the director now owns 113,808 shares of the company’s stock, valued at approximately $444,989.28. The transaction was disclosed in a legal filing with the SEC, which is available at this hyperlink. 7.33% of the stock is owned by company insiders.

Cerus Corporation operates as a biomedical products company. The company focuses on developing and commercializing the INTERCEPT Blood System to enhance blood safety. Its INTERCEPT Blood System, a proprietary technology for controlling biological replication that is designed to reduce blood-borne pathogens in donated blood components intended for transfusion.

Want to see what other hedge funds are holding CERS? Visit HoldingsChannel.com to get the latest 13F filings and insider trades for Cerus Co. (NASDAQ:CERS – Get Rating). 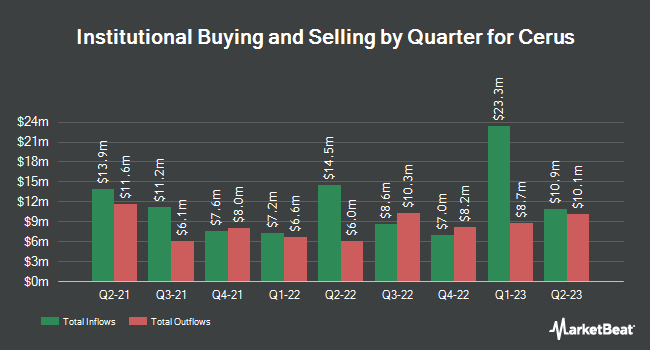 Receive News & Ratings for Cerus Daily - Enter your email address below to receive a concise daily summary of the latest news and analysts' ratings for Cerus and related companies with MarketBeat.com's FREE daily email newsletter.

Complete the form below to receive the latest headlines and analysts' recommendations for Cerus with our free daily email newsletter: