SG Americas Securities LLC decreased its stake in shares of LeMaitre Vascular, Inc. (NASDAQ:LMAT – Get Rating) by 44.7% during the 3rd quarter, HoldingsChannel.com reports. The firm owned 13,679 shares of the medical instruments supplier’s stock after selling 11,059 shares during the quarter. SG Americas Securities LLC’s holdings in LeMaitre Vascular were worth $693,000 as of its most recent filing with the SEC.

In other LeMaitre Vascular news, Director John A. Roush sold 7,500 shares of the business’s stock in a transaction dated Thursday, December 1st. The shares were sold at an average price of $46.65, for a total value of $349,875.00. Following the transaction, the director now directly owns 8,076 shares in the company, valued at $376,745.40. The transaction was disclosed in a document filed with the SEC, which is available through this link. Company insiders own 12.50% of the company’s stock.

LeMaitre Vascular (NASDAQ:LMAT – Get Rating) last released its quarterly earnings results on Thursday, October 27th. The medical instruments supplier reported $0.25 EPS for the quarter, missing analysts’ consensus estimates of $0.28 by ($0.03). The firm had revenue of $39.03 million during the quarter, compared to analyst estimates of $40.13 million. LeMaitre Vascular had a net margin of 13.22% and a return on equity of 9.33%. On average, research analysts expect that LeMaitre Vascular, Inc. will post 1.08 EPS for the current fiscal year.

The company also recently declared a quarterly dividend, which was paid on Thursday, December 1st. Shareholders of record on Thursday, November 17th were given a $0.125 dividend. The ex-dividend date of this dividend was Wednesday, November 16th. This represents a $0.50 dividend on an annualized basis and a yield of 1.06%. LeMaitre Vascular’s dividend payout ratio (DPR) is presently 52.08%.

LeMaitre Vascular, Inc designs, markets, sells, services, and supports medical devices and implants for the treatment of peripheral vascular disease worldwide. It offers angioscope, a fiberoptic catheter used for viewing the lumen of a blood vessel; embolectomy catheters to remove blood clots from arteries or veins; occlusion catheters that temporarily occlude the blood flow; perfusion catheters to perfuse the blood and other fluids into the vasculature; and thrombectomy catheters, which features a silicone balloon for removing thrombi in the venous system.

Want to see what other hedge funds are holding LMAT? Visit HoldingsChannel.com to get the latest 13F filings and insider trades for LeMaitre Vascular, Inc. (NASDAQ:LMAT – Get Rating). 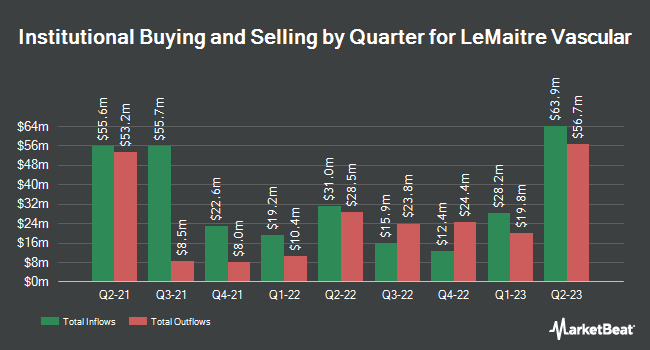 Complete the form below to receive the latest headlines and analysts' recommendations for LeMaitre Vascular with our free daily email newsletter: