Shares of argenx SE (NASDAQ:ARGX – Get Rating) have received a consensus rating of “Moderate Buy” from the fifteen brokerages that are currently covering the company, MarketBeat Ratings reports. One research analyst has rated the stock with a hold recommendation and thirteen have assigned a buy recommendation to the company. The average twelve-month price target among brokerages that have issued ratings on the stock in the last year is $452.18.

Want More Great Investing Ideas?
argenx (NASDAQ:ARGX – Get Rating) last posted its quarterly earnings data on Thursday, October 27th. The company reported ($4.26) EPS for the quarter, missing analysts’ consensus estimates of ($3.50) by ($0.76). argenx had a negative return on equity of 49.53% and a negative net margin of 295.08%. The company had revenue of $146.49 million for the quarter, compared to the consensus estimate of $115.49 million. Analysts forecast that argenx will post -15.6 EPS for the current year. 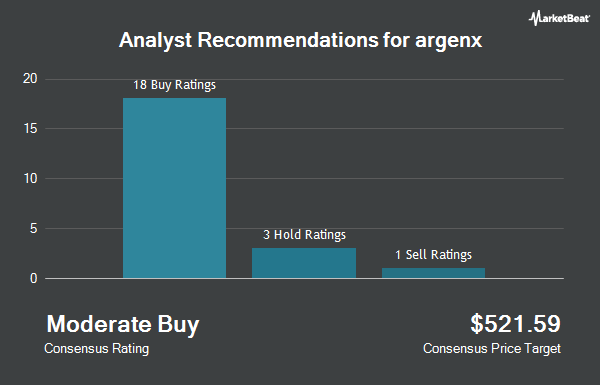