Concert Pharmaceuticals (NASDAQ:CNCE – Get Rating) last released its quarterly earnings results on Monday, November 7th. The biotechnology company reported ($0.58) earnings per share for the quarter, topping the consensus estimate of ($0.59) by $0.01. The firm had revenue of $0.01 million for the quarter, compared to the consensus estimate of $0.33 million.

In other Concert Pharmaceuticals news, CEO Roger D. Tung sold 9,240 shares of the stock in a transaction that occurred on Friday, January 6th. The stock was sold at an average price of $7.24, for a total transaction of $66,897.60. Following the transaction, the chief executive officer now directly owns 971,018 shares in the company, valued at approximately $7,030,170.32. The transaction was disclosed in a document filed with the Securities & Exchange Commission, which is available through this link. Company insiders own 11.33% of the company’s stock.

Concert Pharmaceuticals, Inc is a clinical stage biopharmaceutical company, which discovers and develops novel small molecule drugs through the use of deuterium technology. Its product candidates target a range of diseases including autoimmune disorders, inflammation, and central nervous system disorders. 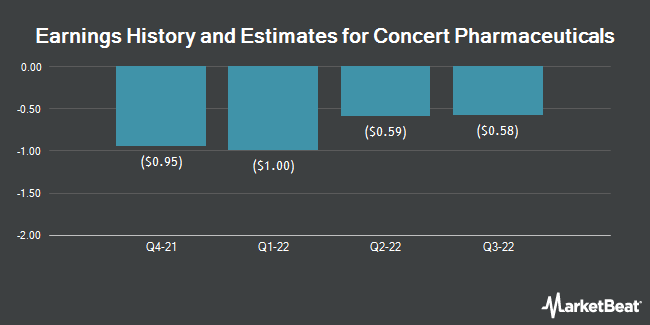 Complete the form below to receive the latest headlines and analysts' recommendations for Concert Pharmaceuticals with our free daily email newsletter: