Oregon Public Employees Retirement Fund boosted its stake in shares of Helmerich & Payne, Inc. (NYSE:HP – Get Rating) by 0.9% during the 3rd quarter, according to its most recent Form 13F filing with the Securities and Exchange Commission. The firm owned 34,856 shares of the oil and gas company’s stock after buying an additional 309 shares during the quarter. Oregon Public Employees Retirement Fund’s holdings in Helmerich & Payne were worth $1,289,000 as of its most recent filing with the Securities and Exchange Commission.

In related news, SVP John R. Bell sold 4,314 shares of the firm’s stock in a transaction on Wednesday, October 26th. The shares were sold at an average price of $50.00, for a total transaction of $215,700.00. Following the completion of the sale, the senior vice president now directly owns 117,395 shares of the company’s stock, valued at approximately $5,869,750. The transaction was disclosed in a document filed with the SEC, which is available through the SEC website. Company insiders own 4.35% of the company’s stock.

Helmerich & Payne (NYSE:HP – Get Rating) last released its quarterly earnings results on Wednesday, November 16th. The oil and gas company reported $0.45 earnings per share for the quarter, meeting analysts’ consensus estimates of $0.45. The business had revenue of $631.33 million during the quarter, compared to analyst estimates of $597.29 million. Helmerich & Payne had a net margin of 0.34% and a return on equity of 0.45%. The business’s revenue was up 83.6% on a year-over-year basis. During the same period last year, the business earned ($0.62) EPS. As a group, analysts predict that Helmerich & Payne, Inc. will post 4.48 EPS for the current year.

Want to see what other hedge funds are holding HP? Visit HoldingsChannel.com to get the latest 13F filings and insider trades for Helmerich & Payne, Inc. (NYSE:HP – Get Rating). 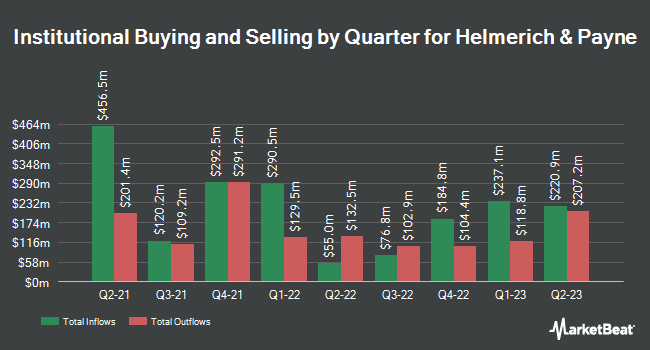