JPMorgan Chase & Co. (NYSE:JPM) Director Mellody L. Hobson purchased 375 shares of JPMorgan Chase & Co. stock in a transaction that occurred on Thursday, January 19th. The shares were bought at an average price of $134.53 per share, with a total value of $50,448.75. Following the transaction, the director now owns 22,040 shares of the company’s stock, valued at approximately $2,965,041.20. The acquisition was disclosed in a filing with the Securities & Exchange Commission, which can be accessed through this link.

Want More Great Investing Ideas?
The business also recently announced a quarterly dividend, which will be paid on Tuesday, January 31st. Investors of record on Friday, January 6th will be paid a $1.00 dividend. This represents a $4.00 dividend on an annualized basis and a yield of 2.96%. The ex-dividend date is Thursday, January 5th. JPMorgan Chase & Co.’s dividend payout ratio is currently 33.11%.

JPMorgan Chase & Co is a financial holding company. It provides financial and investment banking services. The firm offers a range of investment banking products and services in all capital markets, including advising on corporate strategy and structure, capital raising in equity and debt markets, risk management, market making in cash securities and derivative instruments, and brokerage and research. 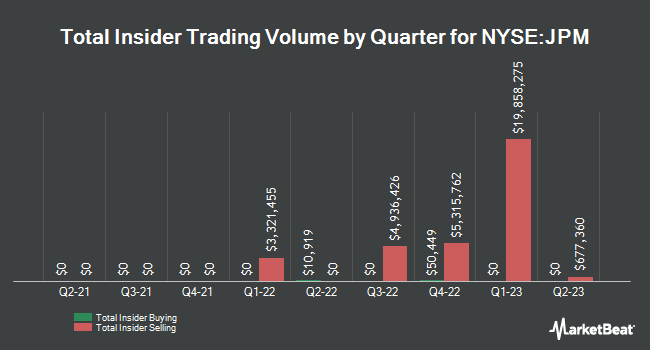 Complete the form below to receive the latest headlines and analysts' recommendations for JPMorgan Chase & Co. with our free daily email newsletter: