Strs Ohio increased its stake in shares of NMI Holdings, Inc. (NASDAQ:NMIH – Get Rating) by 400.0% in the 3rd quarter, Holdings Channel reports. The firm owned 3,000 shares of the financial services provider’s stock after purchasing an additional 2,400 shares during the period. Strs Ohio’s holdings in NMI were worth $61,000 at the end of the most recent reporting period.

Want More Great Investing Ideas?
NMI (NASDAQ:NMIH – Get Rating) last posted its earnings results on Tuesday, November 1st. The financial services provider reported $0.90 EPS for the quarter, beating analysts’ consensus estimates of $0.82 by $0.08. NMI had a net margin of 54.43% and a return on equity of 18.34%. The firm had revenue of $130.58 million for the quarter, compared to the consensus estimate of $134.44 million. On average, sell-side analysts expect that NMI Holdings, Inc. will post 3.38 earnings per share for the current fiscal year.

NMIH has been the subject of several analyst reports. BTIG Research cut shares of NMI from a “buy” rating to a “neutral” rating and set a $24.00 price target for the company. in a research note on Tuesday, December 6th. Barclays cut shares of NMI from an “overweight” rating to an “equal weight” rating and lowered their price objective for the stock from $31.00 to $25.00 in a research report on Friday, January 6th. Credit Suisse Group reduced their target price on shares of NMI to $28.00 in a report on Thursday, October 13th. JPMorgan Chase & Co. reduced their target price on shares of NMI from $27.00 to $26.00 in a report on Tuesday, January 10th. Finally, StockNews.com began coverage on shares of NMI in a report on Wednesday, October 12th. They set a “buy” rating on the stock. Four research analysts have rated the stock with a hold rating and two have assigned a buy rating to the company. Based on data from MarketBeat.com, the company has a consensus rating of “Hold” and an average target price of $25.25.

Want to see what other hedge funds are holding NMIH? Visit HoldingsChannel.com to get the latest 13F filings and insider trades for NMI Holdings, Inc. (NASDAQ:NMIH – Get Rating). 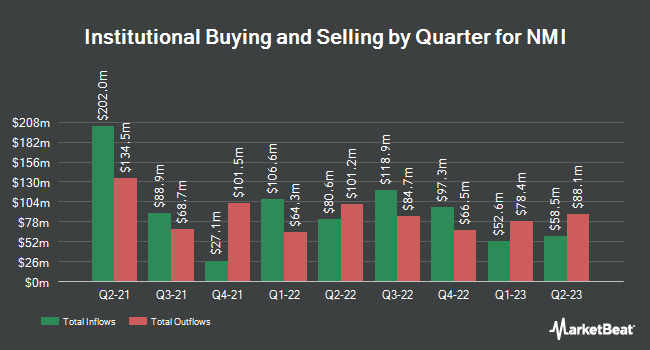 Receive News & Ratings for NMI Daily - Enter your email address below to receive a concise daily summary of the latest news and analysts' ratings for NMI and related companies with MarketBeat.com's FREE daily email newsletter.

Complete the form below to receive the latest headlines and analysts' recommendations for NMI with our free daily email newsletter: