Victory Capital Management Inc. reduced its stake in shares of Olin Co. (NYSE:OLN – Get Rating) by 8.7% in the 3rd quarter, according to the company in its most recent 13F filing with the Securities and Exchange Commission (SEC). The institutional investor owned 795,520 shares of the specialty chemicals company’s stock after selling 76,129 shares during the period. Victory Capital Management Inc.’s holdings in Olin were worth $34,112,000 at the end of the most recent quarter.

Olin (NYSE:OLN – Get Rating) last announced its quarterly earnings results on Wednesday, October 26th. The specialty chemicals company reported $2.18 earnings per share for the quarter, beating analysts’ consensus estimates of $1.86 by $0.32. The business had revenue of $2.32 billion for the quarter, compared to the consensus estimate of $2.38 billion. Olin had a net margin of 14.62% and a return on equity of 56.96%. As a group, research analysts forecast that Olin Co. will post 8.84 EPS for the current fiscal year.

The firm also recently declared a quarterly dividend, which was paid on Friday, December 9th. Stockholders of record on Thursday, November 10th were paid a dividend of $0.20 per share. The ex-dividend date of this dividend was Wednesday, November 9th. This represents a $0.80 annualized dividend and a dividend yield of 1.42%. Olin’s dividend payout ratio is currently 8.59%.

In other Olin news, COO James A. Varilek sold 50,000 shares of Olin stock in a transaction on Friday, November 18th. The shares were sold at an average price of $56.56, for a total transaction of $2,828,000.00. Following the completion of the transaction, the chief operating officer now directly owns 17,761 shares of the company’s stock, valued at $1,004,562.16. The transaction was disclosed in a document filed with the SEC, which is available at the SEC website. 9.00% of the stock is owned by company insiders. 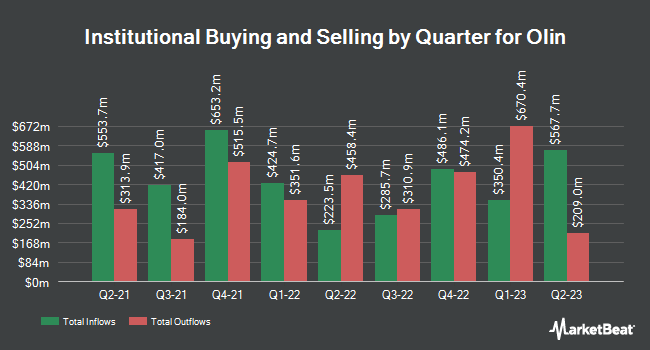