Park Avenue Securities LLC boosted its position in Capri Holdings Limited (NYSE:CPRI – Get Rating) by 18.7% during the 3rd quarter, HoldingsChannel.com reports. The firm owned 8,083 shares of the company’s stock after purchasing an additional 1,271 shares during the quarter. Park Avenue Securities LLC’s holdings in Capri were worth $311,000 at the end of the most recent reporting period.

Capri (NYSE:CPRI – Get Rating) last issued its quarterly earnings data on Wednesday, November 9th. The company reported $1.79 EPS for the quarter, beating the consensus estimate of $1.55 by $0.24. The firm had revenue of $1.41 billion during the quarter, compared to the consensus estimate of $1.40 billion. Capri had a net margin of 14.10% and a return on equity of 38.60%. The company’s quarterly revenue was up 8.6% compared to the same quarter last year. During the same period in the prior year, the firm posted $1.53 earnings per share. On average, research analysts predict that Capri Holdings Limited will post 6.87 earnings per share for the current year.

Capri declared that its Board of Directors has approved a share repurchase plan on Wednesday, November 9th that allows the company to buyback $1.00 billion in shares. This buyback authorization allows the company to buy up to 14.3% of its stock through open market purchases. Stock buyback plans are typically an indication that the company’s leadership believes its shares are undervalued.

Capri Holdings Ltd. operates as a global fashion luxury group. It engages in the design and distribution of sportswear, accessories, footwear and apparel of branded women’s apparel and accessories and men’s apparel. The firm operates through the following segments: Versace, Jimmy Choo, and Michael Kors. 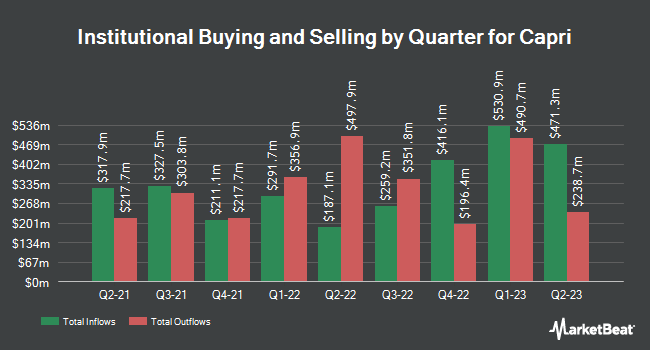