Raymond James Financial Services Advisors Inc. lifted its holdings in PDC Energy, Inc. (NASDAQ:PDCE – Get Rating) by 6.1% in the 3rd quarter, Holdings Channel.com reports. The fund owned 14,400 shares of the energy producer’s stock after buying an additional 829 shares during the quarter. Raymond James Financial Services Advisors Inc.’s holdings in PDC Energy were worth $832,000 at the end of the most recent quarter.

PDC Energy (NASDAQ:PDCE – Get Rating) last posted its quarterly earnings results on Wednesday, November 2nd. The energy producer reported $3.77 earnings per share (EPS) for the quarter, missing analysts’ consensus estimates of $4.13 by ($0.36). PDC Energy had a return on equity of 45.90% and a net margin of 49.76%. The business had revenue of $1.51 billion during the quarter, compared to the consensus estimate of $1.06 billion. On average, equities analysts expect that PDC Energy, Inc. will post 15.73 earnings per share for the current year.

PDC Energy, Inc, an independent exploration and production company, acquires, explores for, develops, and produces crude oil, natural gas, and natural gas liquids in the United States. The company's operations are primarily located in the Wattenberg Field in Colorado and the Delaware Basin in Texas.

Want to see what other hedge funds are holding PDCE? Visit HoldingsChannel.com to get the latest 13F filings and insider trades for PDC Energy, Inc. (NASDAQ:PDCE – Get Rating). 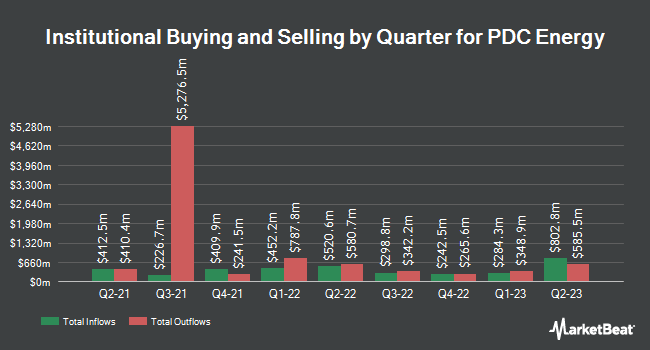 Complete the form below to receive the latest headlines and analysts' recommendations for PDC Energy with our free daily email newsletter: