SG Americas Securities LLC trimmed its holdings in shares of Leidos Holdings, Inc. (NYSE:LDOS – Get Rating) by 80.0% in the 3rd quarter, according to its most recent Form 13F filing with the Securities and Exchange Commission. The firm owned 6,653 shares of the aerospace company’s stock after selling 26,581 shares during the quarter. SG Americas Securities LLC’s holdings in Leidos were worth $582,000 at the end of the most recent quarter.

Want More Great Investing Ideas?
Leidos (NYSE:LDOS – Get Rating) last released its quarterly earnings results on Tuesday, November 1st. The aerospace company reported $1.59 earnings per share (EPS) for the quarter, beating analysts’ consensus estimates of $1.56 by $0.03. The company had revenue of $3.61 billion for the quarter, compared to the consensus estimate of $3.54 billion. Leidos had a net margin of 4.81% and a return on equity of 21.30%. Sell-side analysts forecast that Leidos Holdings, Inc. will post 6.36 EPS for the current fiscal year.

The firm also recently declared a quarterly dividend, which was paid on Friday, December 30th. Investors of record on Thursday, December 15th were paid a dividend of $0.36 per share. This represents a $1.44 dividend on an annualized basis and a yield of 1.50%. The ex-dividend date was Wednesday, December 14th. Leidos’s payout ratio is 29.45%.

Leidos Holdings, Inc, together with its subsidiaries, provides services and solutions in the defense, intelligence, civil, and health markets in the United States and internationally. It operates through three segments: Defense Solutions, Civil, and Health. The Defense Solutions segment offers national security solutions and systems for air, land, sea, space, and cyberspace for the U.S.

Want to see what other hedge funds are holding LDOS? Visit HoldingsChannel.com to get the latest 13F filings and insider trades for Leidos Holdings, Inc. (NYSE:LDOS – Get Rating). 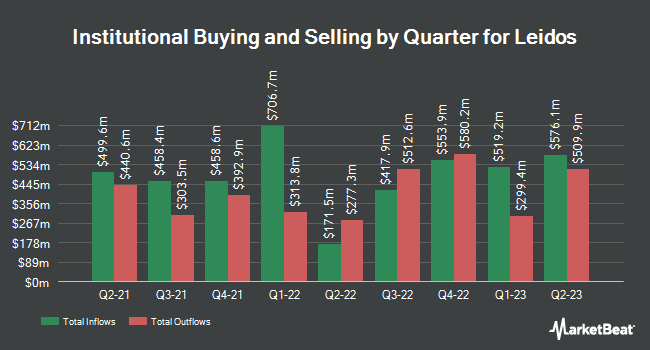 Receive News & Ratings for Leidos Daily - Enter your email address below to receive a concise daily summary of the latest news and analysts' ratings for Leidos and related companies with MarketBeat.com's FREE daily email newsletter.

Complete the form below to receive the latest headlines and analysts' recommendations for Leidos with our free daily email newsletter: