US Bancorp DE lowered its stake in shares of Orange S.A. (NYSE:ORAN – Get Rating) by 19.8% during the third quarter, according to the company in its most recent filing with the Securities & Exchange Commission. The institutional investor owned 49,403 shares of the technology company’s stock after selling 12,174 shares during the period. US Bancorp DE’s holdings in Orange were worth $444,000 at the end of the most recent quarter.

Orange SA provides various fixed telephony and mobile telecommunications, data transmission, and other value-added services to customers, businesses, and other telecommunications operators in France and internationally. It operates through France; Spain and Other European Countries; The Africa and Middle East; Enterprise; International Carriers & Shared Services; and Mobile Financial Services segments.

Want to see what other hedge funds are holding ORAN? Visit HoldingsChannel.com to get the latest 13F filings and insider trades for Orange S.A. (NYSE:ORAN – Get Rating). 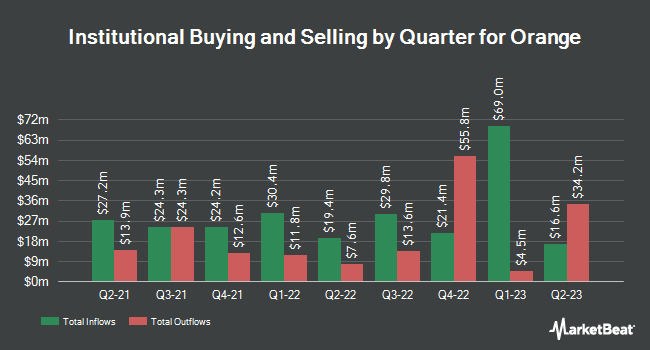 Receive News & Ratings for Orange Daily - Enter your email address below to receive a concise daily summary of the latest news and analysts' ratings for Orange and related companies with MarketBeat.com's FREE daily email newsletter.

Complete the form below to receive the latest headlines and analysts' recommendations for Orange with our free daily email newsletter: