Air Canada (TSE:AC – Get Rating) had its price objective lifted by Scotiabank from C$25.00 to C$28.00 in a research report sent to investors on Monday morning, Marketbeat reports. Scotiabank currently has an outperform rating on the stock.

Want More Great Investing Ideas?
Air Canada (TSE:AC – Get Rating) last issued its earnings results on Friday, October 28th. The company reported C$0.68 earnings per share for the quarter, topping the consensus estimate of C$0.43 by C$0.25. The firm had revenue of C$5.32 billion during the quarter, compared to analysts’ expectations of C$4.93 billion. Sell-side analysts expect that Air Canada will post 0.73 earnings per share for the current year.

Air Canada provides domestic, U.S. transborder, and international airline services. It offers scheduled passenger services under the Air Canada Vacations and Air Canada Rouge brand name in the Canadian market, the Canada-U.S. transborder market, and in the international market to and from Canada, as well as through capacity purchase agreements on other regional carriers. 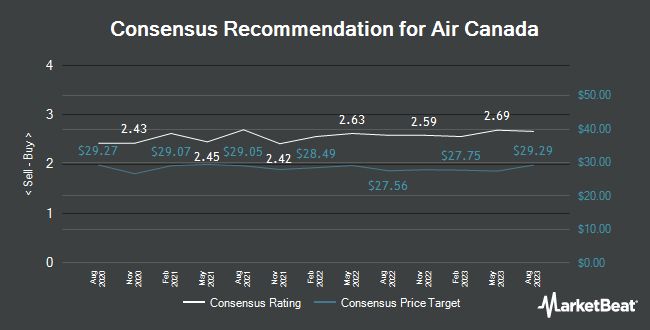 Complete the form below to receive the latest headlines and analysts' recommendations for Air Canada with our free daily email newsletter: