In other news, CFO James M. Watkins bought 2,500 shares of the stock in a transaction dated Wednesday, November 9th. The shares were bought at an average cost of $52.34 per share, with a total value of $130,850.00. Following the completion of the transaction, the chief financial officer now directly owns 11,730 shares of the company’s stock, valued at $613,948.20. The acquisition was disclosed in a document filed with the Securities & Exchange Commission, which is accessible through the SEC website. 1.20% of the stock is owned by insiders.

Boot Barn (NYSE:BOOT – Get Rating) last issued its earnings results on Wednesday, October 26th. The company reported $1.06 earnings per share for the quarter, topping analysts’ consensus estimates of $0.91 by $0.15. Boot Barn had a return on equity of 29.71% and a net margin of 11.68%. The company had revenue of $351.55 million for the quarter, compared to analyst estimates of $343.00 million. During the same period in the prior year, the firm earned $1.22 earnings per share. Boot Barn’s revenue for the quarter was up 12.4% on a year-over-year basis. Research analysts predict that Boot Barn Holdings, Inc. will post 5.75 EPS for the current fiscal year. 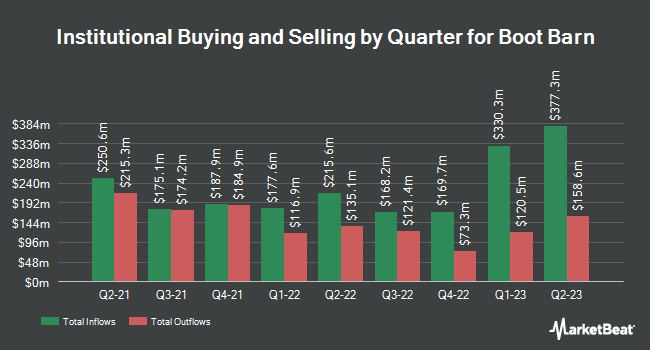