Exelon (NASDAQ:EXC – Get Rating) had its target price increased by Credit Suisse Group from $42.00 to $46.00 in a research note released on Monday morning, Benzinga reports. They currently have an outperform rating on the stock.

Want More Great Investing Ideas?
Exelon (NASDAQ:EXC – Get Rating) last released its quarterly earnings data on Thursday, November 3rd. The company reported $0.75 earnings per share for the quarter, beating the consensus estimate of $0.72 by $0.03. Exelon had a return on equity of 10.12% and a net margin of 8.85%. The company had revenue of $4.85 billion for the quarter, compared to analyst estimates of $5.69 billion. During the same period in the prior year, the company posted $1.09 EPS. The company’s revenue was down 45.6% compared to the same quarter last year. Equities research analysts expect that Exelon will post 2.27 EPS for the current year.

The company also recently disclosed a quarterly dividend, which was paid on Friday, December 9th. Shareholders of record on Tuesday, November 15th were issued a dividend of $0.3375 per share. This represents a $1.35 annualized dividend and a yield of 3.23%. The ex-dividend date of this dividend was Monday, November 14th. Exelon’s dividend payout ratio is 62.50%.

Exelon Corp. operates as a utility services holding company, which engages in the energy generation, power marketing, and energy delivery business. It operates through the following segments: Mid Atlantic, Midwest, New York, Electric Reliability Council of Texas (ERCOT) and other Power Regions. The Mid-Atlantic segment represents operations in the eastern half of PJM, which includes New Jersey, Maryland, Virginia, West Virginia, Delaware, the District of Columbia and parts of Pennsylvania and North Carolina. 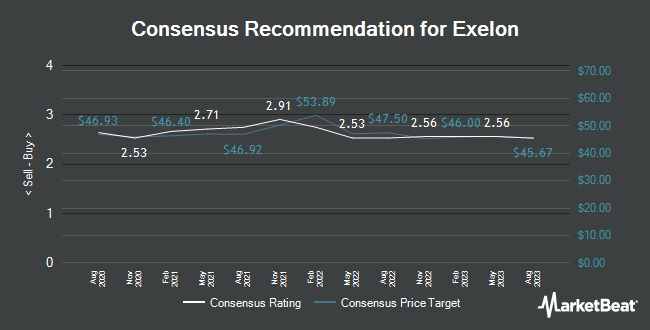 Contrasting Hyve Group and The Competition

Head to Head Analysis: Serco Group and The Competition