Raymond James & Associates trimmed its position in shares of The Boston Beer Company, Inc. (NYSE:SAM – Get Rating) by 62.4% during the third quarter, Holdings Channel reports. The institutional investor owned 5,808 shares of the company’s stock after selling 9,646 shares during the quarter. Raymond James & Associates’ holdings in Boston Beer were worth $1,880,000 as of its most recent SEC filing.

In other news, VP Annette N. Fritsch sold 150 shares of the company’s stock in a transaction that occurred on Wednesday, October 26th. The stock was sold at an average price of $407.89, for a total transaction of $61,183.50. Following the completion of the sale, the vice president now owns 1,275 shares in the company, valued at $520,059.75. The transaction was disclosed in a document filed with the Securities & Exchange Commission, which is available through the SEC website. In the last ninety days, insiders have sold 250 shares of company stock worth $97,560. 23.30% of the stock is currently owned by insiders.

Want to see what other hedge funds are holding SAM? Visit HoldingsChannel.com to get the latest 13F filings and insider trades for The Boston Beer Company, Inc. (NYSE:SAM – Get Rating). 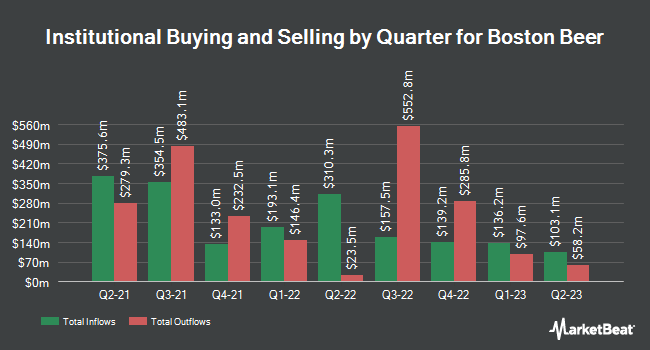