Raymond James Financial Services Advisors Inc. lessened its holdings in Danimer Scientific, Inc. (NYSE:DNMR – Get Rating) by 7.5% during the third quarter, according to the company in its most recent 13F filing with the Securities & Exchange Commission. The firm owned 242,300 shares of the company’s stock after selling 19,744 shares during the quarter. Raymond James Financial Services Advisors Inc.’s holdings in Danimer Scientific were worth $715,000 as of its most recent filing with the Securities & Exchange Commission.

Want More Great Investing Ideas?
Danimer Scientific (NYSE:DNMR – Get Rating) last announced its quarterly earnings results on Tuesday, November 8th. The company reported ($0.30) earnings per share (EPS) for the quarter, missing the consensus estimate of ($0.24) by ($0.06). Danimer Scientific had a negative net margin of 295.12% and a negative return on equity of 25.06%. The company had revenue of $10.45 million for the quarter, compared to analysts’ expectations of $14.00 million. Research analysts anticipate that Danimer Scientific, Inc. will post -1.52 EPS for the current year.

In other news, CMO Scott Tuten sold 10,000 shares of the firm’s stock in a transaction that occurred on Thursday, November 17th. The stock was sold at an average price of $2.68, for a total value of $26,800.00. Following the completion of the transaction, the chief marketing officer now owns 434,136 shares in the company, valued at approximately $1,163,484.48. The transaction was disclosed in a document filed with the SEC, which is available at the SEC website. In the last quarter, insiders have sold 30,000 shares of company stock worth $64,500. Company insiders own 14.60% of the company’s stock.

Want to see what other hedge funds are holding DNMR? Visit HoldingsChannel.com to get the latest 13F filings and insider trades for Danimer Scientific, Inc. (NYSE:DNMR – Get Rating). 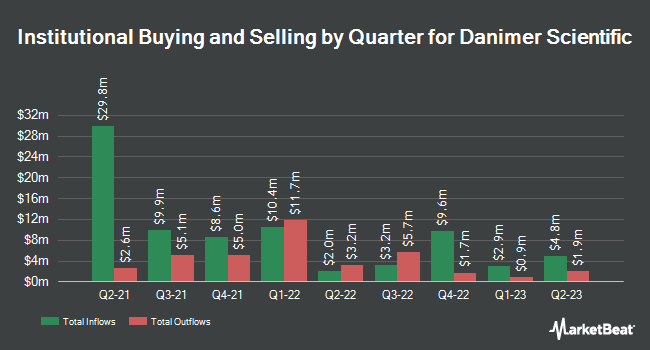 Complete the form below to receive the latest headlines and analysts' recommendations for Danimer Scientific with our free daily email newsletter: