Raymond James Financial Services Advisors Inc. grew its stake in shares of Fastly, Inc. (NYSE:FSLY – Get Rating) by 44.2% in the 3rd quarter, according to its most recent Form 13F filing with the Securities & Exchange Commission. The fund owned 71,394 shares of the company’s stock after acquiring an additional 21,894 shares during the period. Raymond James Financial Services Advisors Inc.’s holdings in Fastly were worth $654,000 at the end of the most recent quarter.

FSLY has been the subject of a number of recent research reports. Credit Suisse Group assumed coverage on shares of Fastly in a report on Monday, November 21st. They issued a “neutral” rating and a $9.50 price objective for the company. Citigroup reduced their price target on Fastly from $10.00 to $8.00 and set a “sell” rating on the stock in a research report on Tuesday, November 8th. Piper Sandler lowered their price objective on Fastly from $13.00 to $10.00 in a research note on Thursday, November 3rd. Finally, Morgan Stanley cut their target price on Fastly from $12.00 to $9.00 and set an “underweight” rating for the company in a research report on Thursday, October 20th. Four research analysts have rated the stock with a sell rating, two have given a hold rating and one has assigned a strong buy rating to the stock. According to MarketBeat.com, Fastly has an average rating of “Hold” and an average price target of $12.39.

Fastly (NYSE:FSLY – Get Rating) last issued its quarterly earnings results on Wednesday, November 2nd. The company reported ($0.44) earnings per share (EPS) for the quarter, beating the consensus estimate of ($0.47) by $0.03. Fastly had a negative return on equity of 22.82% and a negative net margin of 49.05%. The company had revenue of $108.50 million for the quarter, compared to analyst estimates of $103.26 million. Research analysts forecast that Fastly, Inc. will post -1.89 EPS for the current fiscal year.

Want to see what other hedge funds are holding FSLY? Visit HoldingsChannel.com to get the latest 13F filings and insider trades for Fastly, Inc. (NYSE:FSLY – Get Rating). 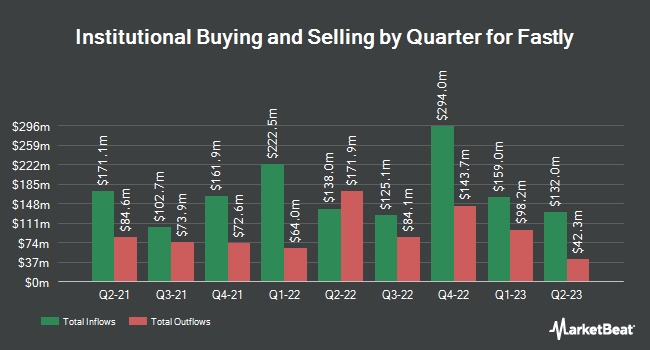