Vivid Seats Inc. (NASDAQ:SEAT – Get Rating) insider Riva Bakal sold 1,341 shares of Vivid Seats stock in a transaction that occurred on Friday, January 20th. The shares were sold at an average price of $7.88, for a total transaction of $10,567.08. Following the completion of the sale, the insider now owns 13,151 shares of the company’s stock, valued at $103,629.88. The transaction was disclosed in a legal filing with the Securities & Exchange Commission, which is available at this link.

Vivid Seats (NASDAQ:SEAT – Get Rating) last posted its earnings results on Tuesday, November 8th. The company reported $0.09 earnings per share for the quarter, missing analysts’ consensus estimates of $0.10 by ($0.01). The company had revenue of $156.82 million for the quarter, compared to the consensus estimate of $129.31 million. Vivid Seats had a negative return on equity of 2.92% and a net margin of 3.66%. As a group, sell-side analysts expect that Vivid Seats Inc. will post 0.45 earnings per share for the current year. 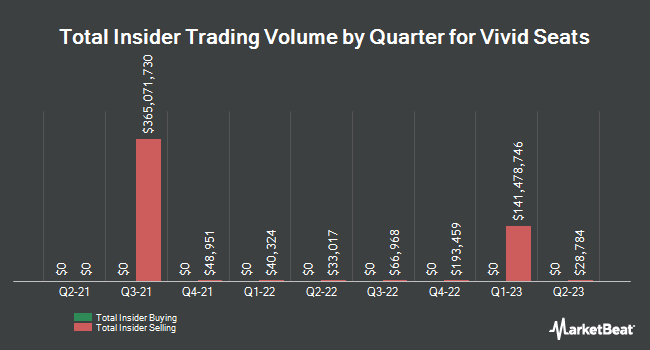