US Bancorp DE reduced its stake in shares of Oxford Industries, Inc. (NYSE:OXM – Get Rating) by 9.8% in the 3rd quarter, according to its most recent Form 13F filing with the Securities and Exchange Commission (SEC). The institutional investor owned 4,255 shares of the textile maker’s stock after selling 464 shares during the quarter. US Bancorp DE’s holdings in Oxford Industries were worth $382,000 as of its most recent SEC filing.

Oxford Industries (NYSE:OXM – Get Rating) last issued its earnings results on Wednesday, December 7th. The textile maker reported $1.46 earnings per share (EPS) for the quarter, topping analysts’ consensus estimates of $1.20 by $0.26. Oxford Industries had a return on equity of 32.35% and a net margin of 11.97%. The firm had revenue of $313.03 million for the quarter, compared to analysts’ expectations of $303.38 million. On average, equities analysts predict that Oxford Industries, Inc. will post 10.74 earnings per share for the current year.

The business also recently announced a quarterly dividend, which will be paid on Friday, January 27th. Shareholders of record on Friday, January 13th will be issued a dividend of $0.55 per share. This represents a $2.20 dividend on an annualized basis and a yield of 1.98%. The ex-dividend date is Thursday, January 12th. Oxford Industries’s dividend payout ratio (DPR) is currently 22.77%.

Oxford Industries, Inc, an apparel company, designs, sources, markets, and distributes products of lifestyle and other brands worldwide. The company offers men's and women's sportswear and related products under the Tommy Bahama brand; women's and girl's dresses and sportswear, scarves, bags, jewelry, and belts, as well as footwear and children's apparel and swimwear under the Lilly Pulitzer brand; and men's shirts, pants, shorts, outerwear, ties, swimwear, footwear, and accessories, as well as women and youth products under the Southern Tide brand.

Want to see what other hedge funds are holding OXM? Visit HoldingsChannel.com to get the latest 13F filings and insider trades for Oxford Industries, Inc. (NYSE:OXM – Get Rating). 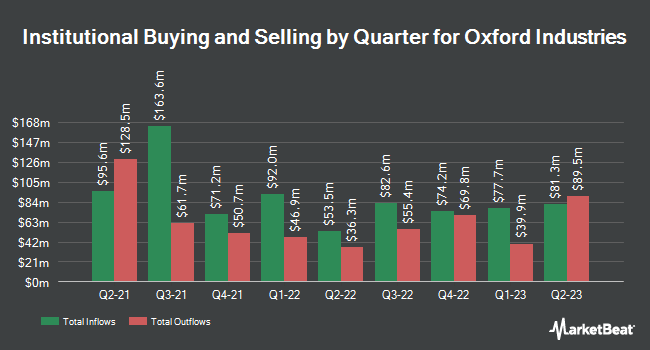 Complete the form below to receive the latest headlines and analysts' recommendations for Oxford Industries with our free daily email newsletter: